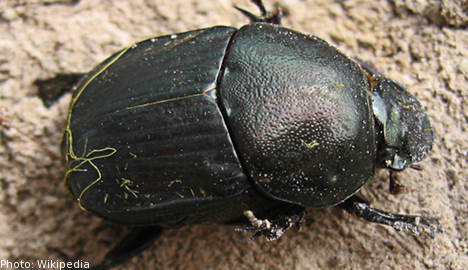 The ground temperature in the African savannah can reach 60 degrees Celsius (140 Fahrenheit), causing most insects to scramble for shadow spots or flee up blades of grass for relief.

But the South African dung beetle has found a unique solution: it simply clambers on top of its lunch, a rolled-up ball of manure.

“The dung beetles climb on top of their dung balls when their heads and front legs become overheated,” researcher Jochen Smolka of Sweden’s Lund University said of the study published in the journal Current Biology.

A fresh dung ball is composed of the moist manure of a large animal. As the moisture evaporates in the heat, the ball becomes cooler than the soil.

“In principle, the dung ball can serve thermoregulation in three ways: as an elevated platform, as a heat sink, and by cooling the sand,” the scientists wrote.

Smolka and other researchers from Sweden and South Africa witnessed that the hotter it was, the more time the beetles spent on top of their balls.

They confirmed these observations by putting little silicon boots on the beetles’ front legs to protect their feet from the heat, and found that booted beetles did not climb onto their balls nearly as often as barefooted ones in hot sand.

South African dung beetles roll dung balls away from fresh piles, so as to eat in peace. Some also lay their eggs in the balls.

“We conclude that dung beetles are unique among insects in transporting a mobile thermal refuge — their dung ball,” the researchers wrote.