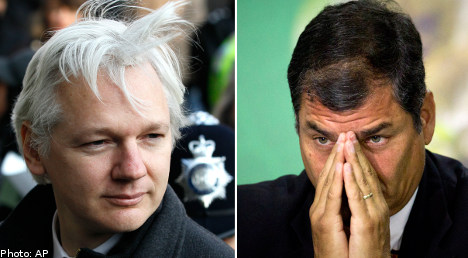 “This problem has a simple solution … We propose that a Swedish prosecutor come to interrogate him at Ecuador’s embassy in London,” Rafael Correa said in an interview with Chilean radio station Cooperativa.

Correa, on a visit to Chile, added that precedents for such a move exist, noting that “this happened on other occasions.”

Assange sought asylum at the Ecuadoran embassy in the British capital in mid June in a bid to avoid extradition to Sweden, where he faces questioning over alleged rape and sexual assault.

Quito gave the 41-year-old Australian asylum in August but Britain has refused to grant him safe passage out of the country, and he remains holed up in the embassy, placing Ecuador in a diplomatic stalemate with Britain.

Assange denies the allegations against him, and claims he could eventually be extradited by Sweden to the United States for prosecution over the WikiLeaks website’s publication of hundreds of thousands of classified US documents.

If Stockholm does not want to send a prosecutor to London, it should provide Assange with a guarantee that he will not be extradited to a third country, Correa said in the same interview.

On Wednesday, Ecuadoran Foreign Minister Ricardo Patino told reporters that he had requested a meeting with Britain to discuss Assange’s worsening health, who Quito claims is losing weight and suffering vision problems.

Assange said in an interview published September 30th that his health was “slowly deteriorating” in the embassy, adding that he had “a racking cough.”