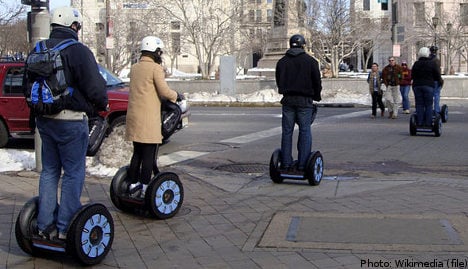 The man approached the Crown Nightclub on Amiralsgatan in central Malmö in the early hours of Thursday and attempted to access the premises.

As the club was closed for the evening he was left banging in frustration on the door. He is also reported to have emptied a refuse container with glass bottles outside the entrance.

The commotion attracted attention and the police were called, arriving in the form of two plain clothes officers on bicycles.

“He is suspected of assaulting a police officer and violently resisting arrest for having driven over a police officers with a Segway,” said Anders Lindell at Malmö police to the newspaper.

The low-speed Segway assault left the police officer nursing bruises and is reported to have evaded serious injury.

The man is furthermore suspected of theft as he was unable to identify the owner of the two-wheeled battery-driven people carrier.