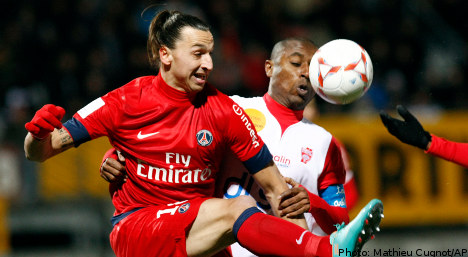 Ibrahimovic struck a fine individually crafted goal 16 minutes from time just when it seemed that PSG’s superiority might come to naught, bringing his personal tally for the campaign to ten of his side’s 16 league goals.

Without the sterling efforts of the former Milan and Barcelona striker the capital club would be marooned in midtable rather than three points clear of Marseille and Toulouse and, they hope, moving towards a first league crown since 1994.

Nancy gave everything they had as they tried to move off the bottom of the table but the easterners were undone when Ibrahimovic held off four defenders before sending a dipping effort low past Cameroonian keeper Guy N’Dy Assembe.

PSG missed several chances – including one of the gilt-edged variety which fell to Jeremy Menez just after the break.

But three points in the bag was what mattered to coach Carlo Ancelotti, who poured praise on his goalscorer.

“Thank you Ibra. He is a fantastic player and with every match he improved the character and the personality of the team and helps it to win,” said the coach.

“The first half was tough as Nancy put us under pressure with some intense play. We lost here last season and this was an important victory for us.”

Marseille, stunned last week by lowly Troyes, will need to see off Lyon, just a solitary point behind them, on Sunday at the Stade Velodrome if they are to go back level on points with PSG.

Toulouse meanwhile kept up their early challenge with a 3-1 win over Brest which saw Wissam Ben Yedder and Etienne Capoue on target before the break before Adrien Regattin sealed the win in the final minute after Benoit Lesoimier had reduced the arrears.

Reigning champions Montpellier, all but out of the Champions League after a home loss to Olympiakos, bounced back with a rare win, 3-1 over Nice with Souleymane Camara, John Utaka and a Renato Civelli own-goal bringing three points that move the southerners into midtable.

A paltry two wins in their opening nine outings had left Montpellier in the bottom five but they hauled themselves clear with a much improved showing.

Elsewhere Saturday, Lille are a point off the top five after seeing off Valenciennes 2-1 with Dmitro Payet conjuring the winner.

Sochaux’s match against Evian was postponed because of snow.

On Friday, Saint-Etienne went fifth in seeing off Rennes 2-0.