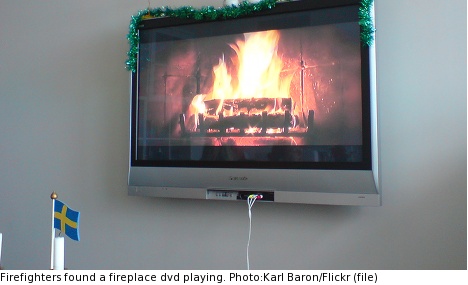 “It was in an apartment building and because they work where they do and there was a door code for the residential building, they had no way of getting in,” said firefighter Jerker Sturedahl to daily Expressen.

The staff at the elderly care home, which houses 22 patients, decided to call emergency services before the fire spread anywhere else.

“They called us and alerted us of a fire,” said Sturedahl to the paper.

However, when the emergency services arrived on the scene shortly after responding to the call, they were in for a bit of a surprise.

The fire that the personnel in the nearby building had spotted through the window turned out to be something much less harmful.

“We quickly realized that it was one of those DVDs of a fireplace,” Sturedahl told Expressen.

The fire, seen by the care home staff, was in fact a DVD of a pleasant fire played on someone’s TV screen.

“We even stayed and watched the fire for a while afterward,” said Göran Gunnarson of the local police to news agency TT after the incident.