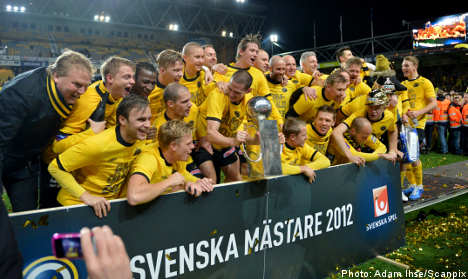 The Borås club nabbed the gold in the tie game, finishing on top of the ladder and narrowly edging out second place Malmö FF, which lost to AIK at Råsunda on the same afternoon.

“It’s damn fine. The whole team has had a strong season and fought the whole way.”

Over 16,000 fans turned up to the Borås Arena in western Sweden to watch the game.

Stefan Ishizaki scored Elfsborg’s only goal of the match, finding the back of the net in the 30th minute and sending the home crowd into a thunderous frenzy.

However, the team found out during the game that they didn’t need much more to win the gold.

“Just into the second half we knew it was over,” explained Svensson.

“AIK led 2-0 so we could relax. But we relaxed too much so they were able to equalize. But the last half an hour was just a joy,” he told TT.

In the 76th minute, Viktor Prodell netted one for Åtvidaberg, but it wasn’t enough to see off the champion team and the game finished at 1-1 to the delight of the home crowd.

Celebrations for Elfsborg erupted in Borås after the game, with several thousand diehard fans braving the chill to celebrate in the town square, Stora Torget.

The win marks the club’s sixth title, with their last win in 2006.