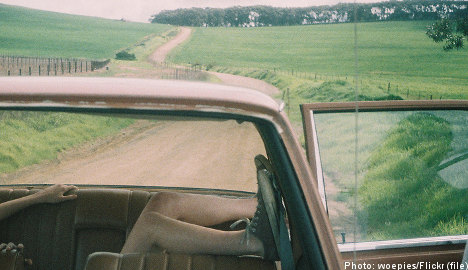 A train near Mörrum in southern Sweden ground to a halt earlier this week after receiving a call about a car that was parked strangely close to the tracks.

“Often when cars are sitting near the tracks it can be copper thieves at work, or unfortunately a person who has tired of life,” explained train dispatcher Mattias Hellberg to Sveriges Radio (SR).

Leaving a train packed with passengers, the driver alighted and headed to the vehicle to get to the root of the problem.

However, to the driver’s surprise, the car contained neither thieves nor people at the end of their tether – rather, he stumbled upon a young couple in the wild throes of lust.

“It was two people who were very happy and having a little moment of passion,” Hellberg said.

“The driver told them they weren’t being very discrete there and asked them to get moving.”

When asked by the broadcaster if sex by the tracks was a common occurrence in southern Sweden, Hellberg responded:

“I don’t know, but this is the first time I’ve heard of it. We called a train on the way to Karlskrona and informed the driver that he should take it easy and stop there to check up on them afterwards.”