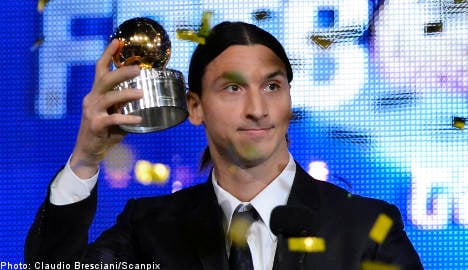 “This is further proof that I’ve had a fantastic season and that I’m continuing to develop. I hope I’ll even get to stand here next year and say the same thing,” Ibrahimovic said on the podium at Stockholm’s Ericsson globe.

Zlatan,31, also thanked his teammates in Milan and Paris and then Erik Hamrén, coach of the Swedish national side, before giving a nod to his fans.

“A big thanks also to the supporters, especially those who were in Kiev. Many thanks,” he said.

Lotta Schelin took home her second consecutive Diamond Ball, and her third since 2006. Schelin, 28, is a striker for the Olympique Lyonnais Ladies team in France and has played for Sweden’s national team since 2004.

Ibrahimovic, who currently plays for Paris Saint-Germain, has won the prestigious Swedish award every year since 2007 and also in 2005.

The award is given to the best Swedish footballer, decided by a panel of experts from the Aftonbladet newspaper and the Swedish Football Association.

The inaugural award was given in 1946, and Zlatan is the only player to win it seven times.