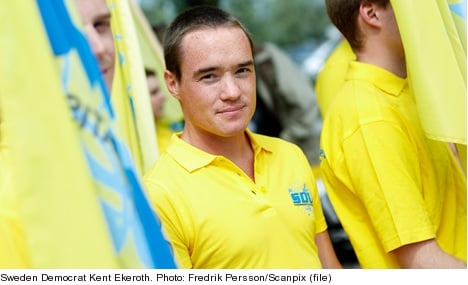 “Kent Ekeroth has in agreement with the party leadership chosen to take a break from his responsibilities as the party’s justice policy spokesman. The reason is the situation which has arisen,” the party said in a statement on Thursday morning.

The new footage published by Expressen shows how Ekeroth, together with former party economic policy spokesman Erik Almqvist who resigned on Wednesday, and Stockholm city councillor Christian Westling, armed themselves with iron bars after scuffling with a drunken man.

In the film Ekeroth can be heard arguing with a woman, who reacted to Ekeroth filming her with his mobile phone camera, reaching out her hand saying, “Let go of that.”

“I can do whatever I like. Do you get that? Back off,” Ekeroth was heard saying, pushing the young woman into the side of a car.

Ekeroth then filmed how he, Almqvist and Westling scuffled with an inebriated man and then picked up large iron bars. When they heard sirens they returned to where the fight had taken place and explained to the officers that the man had threatened them.

The drunken man told the police that Ekeroth had struck the young woman but Almqvist is heard on film giving officers a different version:

“Keep him in, he threatened us…he was going to start on my friend but we got away and defended ourselves, but still, it was unpleasant,” said Almqvist on film.

The three Sweden Democrats decided not to press charges.

“Unless one of the others make a report just to be nasty,” said Almqvist, adding to the police that they should “do the work now instead” before the three politicians leave the scene laughing.

On Wednesday Åkesson had said that Ekeroth would keep his leadership positions within the party for the time being, but hinted the party may review Ekeroth’s place in the Sweden Democrats in the future. With the new footage, however, the party decided that Ekeroth’s chances of representing the party amid the scandal would be “very slim”.

According to party spokesman Martin Kinnunen, Ekeroth will make a public statement later on Thursday.

There have been allegations of tax avoidance, tough policies for migrants, inappropriate drunken nakedness, and a mass departure of civil servants. There have been complaints of a biased media and an entrenched “deep state” resisting every effort to reform.

The four years of Sweden Democrat rule in the Swedish municipality of Hörby have seen, if not all then at least a bit of, the drama of Donald Trump’s America, played out in and around a country market town of 15,000 people.

Yet when the Sweden’s Democrat’s performance was put to the vote, it raised its share of the vote here by four percentage points, winning an impressive 39 percent.

“We were shrieking with joy. This was something we could only dream of,” says Cecilia Bladh in Zito, the town’s Sweden Democrat mayor, when The Local meets her in her office, which is decorated with black and white photos of horses being traded at long-gone country fairs.

Hörby, a 40-minute drive northeast of Malmö in the Skåne countryside, was one of four towns the populist Sweden Democrats controlled at the time of Sweden’s general election two weeks ago. This month, it grew its share of the vote between three and ten percentage points in every one.

“We are very, very happy about the trust that we got from our voters,” Bladh in Zito continues. “I strongly believe that [it’s because] the way we are dealing with questions is very real. It’s reality-based political issues. We have both our feet on the ground, and we listen to our voters and the people here in the municipality. What do you need, what do you want?”

The party has managed to keep open the small schools in the villages surrounding the town, which there had been plans to close and consolidate.

It has hired security guards for the city centre, and cut the amount of spending on social welfare by a quarter, she claimed.

“For the fourth year in a row now, we are increasing safety here in Hörby, so we have less problems now than we had before,” she boasts. 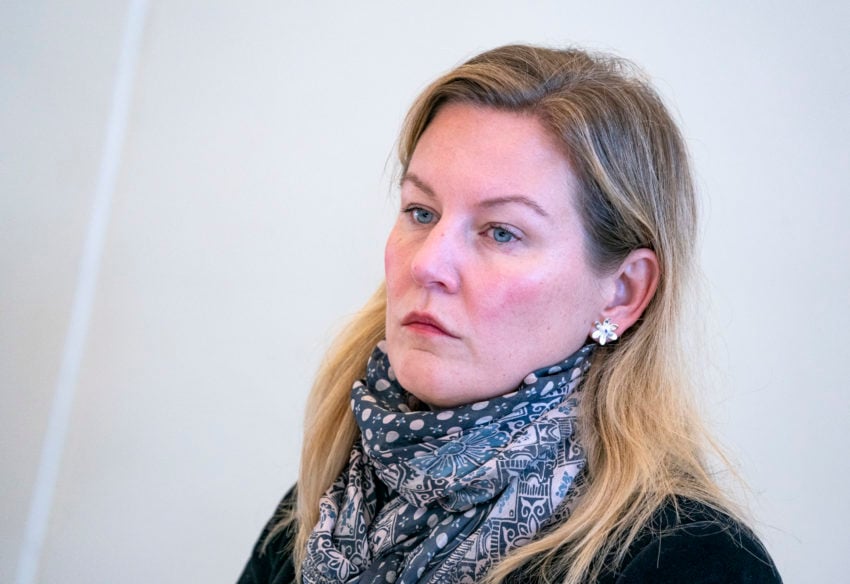 Cecilia Bladh in Zito, the mayor of Hörby, holds a press conference about the fire in the town. Photo: Johan Nilsson/TT

Bladh in Zito and her team have certainly shaken things up, imposing a new organisational structure on the municipality. “We are driving through real change from the ground up, changing the way we look at costs, and changing a lot of the steering documents,” she says.

The SD-led council has tried to halve the municipal budget for “mother-tongue education”, where children with foreign backgrounds are given an hour’s teaching each week in their home language. It has stopped the gay pride rainbow flag from being flown on municipality buildings. It has scrapped an ambition to be “fossil-free by 2020”, and also claims to have slashed the budget for social benefits by a quarter, again by tightening rules for immigrants. 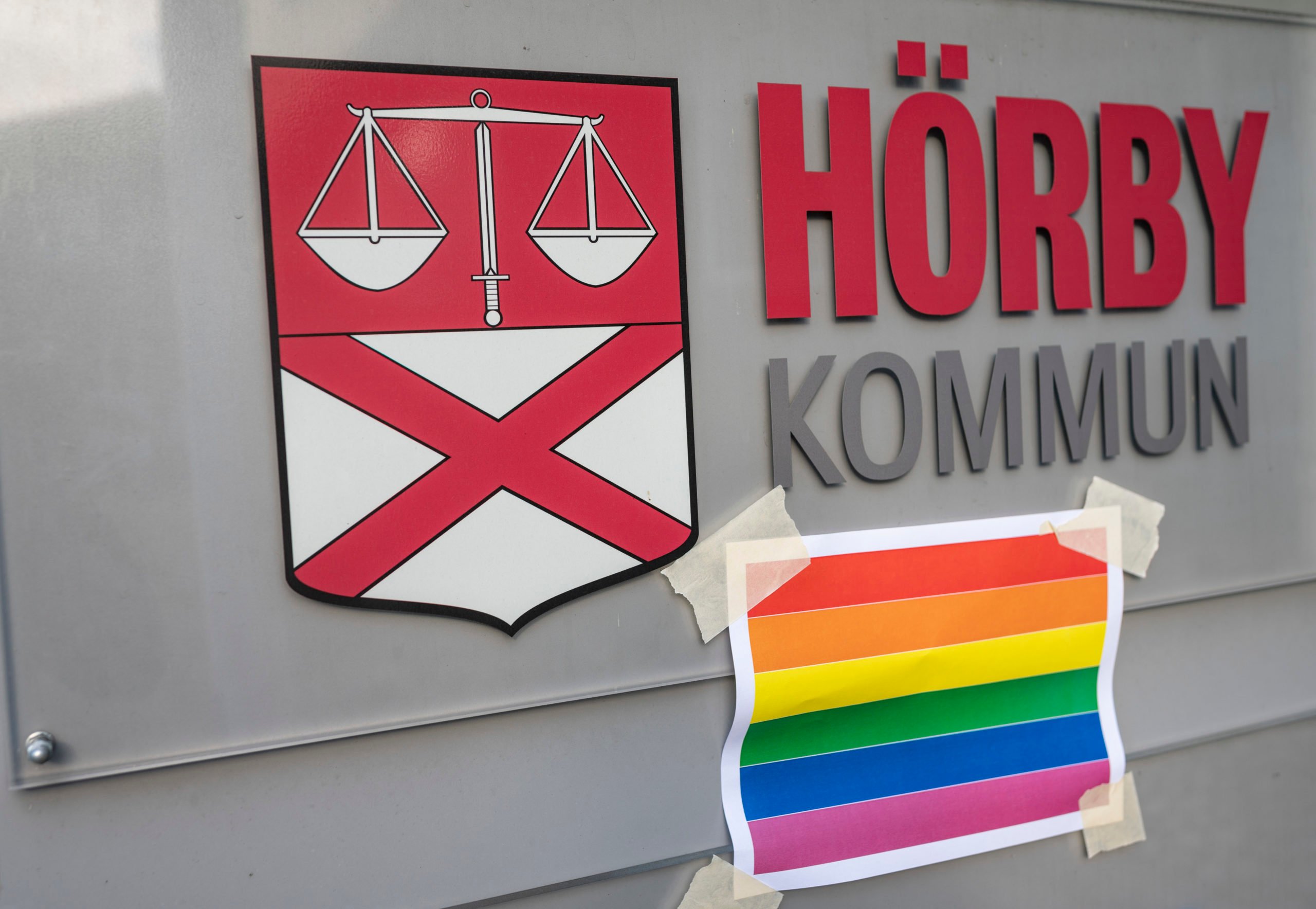 Someone has taped a pride flag to the sign at the entrance of Hörby municipality as a protest. Photo: Johan Nilsson/TT

But it may be that people in Hörby voted for the far-right party itself more than for what it did in the town.

“I think it’s a protest, a protest against those who sit and rule the municipality, who haven’t been listening to the problems people on the ground are facing, and anyway and there’s no one who could do it better,” says 81-year-old Kerstin, as she drags her shopping in a wheeled bag across one of the town’s two central squares.

She voted for the party both in 2018 and again this year because of what she sees as the complacency of the established parties.

The party grew its share of the vote in nearly nine out of every ten municipalities across Sweden, gaining both in its heartlands here in Skåne, and in the northern regions of the country traditionally dominated by the Social Democrats.

READ ALSO: What have the Sweden Democrats proved in four years of municipal rule?

It overtook Sweden’s former farmer’s party, Centre, as the most popular party among agricultural workers, a trend that is likely to be seen Hörby, which is at the centre of some of Sweden’s best agricultural land.

But as in Trump’s America, the party’s success has divided communities, with Hörby no exception.

“It’s completely crazy that so many people here vote for them,” complains Johan Tinné, co-owner of the central Café Innegarden, who puts the party’s growth down to gang shootings in Sweden’s big cities rather than the performance of Bladh in Zito and her team.

When asked if friends and family also vote for the party, he shakes his head. “The day they start voting for SD, I’ll end all my contact with them.”

Even supporters like Kerstin have misgivings: “There have been stories that haven’t been so nice, but they’ve ridden it out.”

First Stefan Borg, the party’s group leader, withdrew his candidacy for mayor after the activist magazine Expo revealed that he had been spreading pro-Russian propaganda, writing posts about “the last generation of Swedes” and “the great replacement”, and making homophobic statements on social media. Bladh in Zito then stepped in.

Both Borg and Bladh in Zito are strangely cosmopolitan figures for small-town Swedish politics, and both have a connection to Russia (albeit only a slight one in her case).

After retiring from his career as a fighter pilot, Borg spent years in Russia learning the language, and told The Local in 2018 that he made his living as “a translator of Russian religious philosophy in the tradition of Dostoevsky”.

Bladh in Zito grew up in the town but spent her 20s and 30s working as a consultant and energy executive in Stockholm, Germany and Rome. According to her LinkedIn profile, she studied in 2000 at Saint Petersburg Electrotechnical University.

At the start of 2020, seven unions representing civil servants, teachers and other municipal workers raised the alarm after a mass departure of top civil servants, and reports of a bullying culture.

“It’s a very toxic environment,” Maria Westlund, chief health and safety representative for the Saco union told the Telegraph. “The working environment has been hostile: People don’t get information shared with them, they get left out of emails. People talk crap about them when they’re not there. They’re not included in meetings.”

Renaldo Tirone, leader of the local Social Democrats, accuses the mayor of “ruling by fear”.

But when the struggle was raging, Borg dismissed it in a Facebook post: ”What’s happening is an attempt by the Deep State, through the unions, to take back political power in Hörby.”

Bladh in Zito argues that it was a good thing that civil servants left the municipality if they were opposed to the structural reforms or didn’t want to enact the ruling parties’ plans.

She claims, however, that over the four years as a whole, the churn among council civil servants has not been larger than at other comparable municipalities.

Then the civil servant in charge of the municipality’s social services had to resign after a naked swimming incident at a staff social event.

Most recently, this June, the Aftonbladet tabloid accused Bladh in Zito of paying Polish builders at least 2.5 million kronor in cash to avoid tax when renovating her historic house in the town centre. She claims her Italian ex-husband handled the payments.

She says that her ex-husband, who is conveniently nowhere to be found, was responsible for paying for the renovation, so she can’t say anything about how the builders were paid. But anyway, she claims, she is the victim of a biased left-wing media, with the journalist behind the story “as far left as you can go”.

“They do not want Sweden Democrats to have the power, and they’ve been trying for four years, even before I was elected, to kick us out,” she says. “They asked my former employers if I did something wrong, they’ve been pushing me politically for three and a half years, and now, because they couldn’t find anything in my professional or political life, they going after my private side.”

For Westlund, Bladh in Zito’s refusal to answer detailed questions about the renovation, like her refusal to work closely with unions, are signs of a worryingly closed and secretive approach.

“They don’t answer the press, they don’t answer when other parties ask them things. They just keep everything quiet,” she says. “I feel like it’s not a democracy anymore.”

Bladh in Zito, on the other hand, thinks the party’s local gains have proven that it can rule responsibly.

“There will always be people who don’t like us, we can never change that,” she says. “But I hope they understand that we don’t bite, we are not neo-Nazis, we are not fascists, and we are not racists. We are a party which has reality-based political views.”
“We’ve done very well in all our four municipalities, and I hope that can give the Moderates the bravery to start cooperating with us at a national level.” 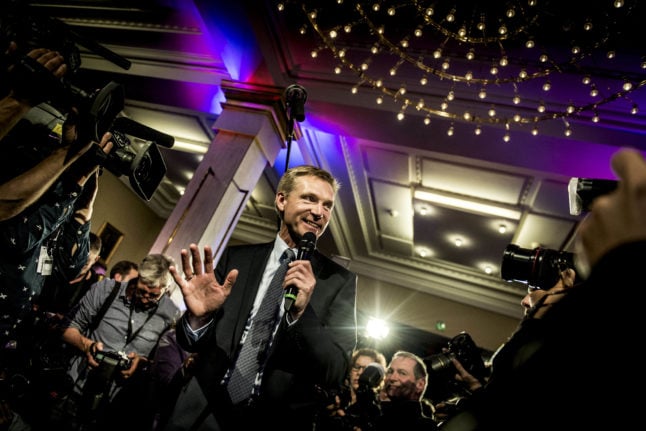 SWEDEN DEMOCRATS
What have the Sweden Democrats learned from other Nordic far-right parties?
Url copied to clipboard!