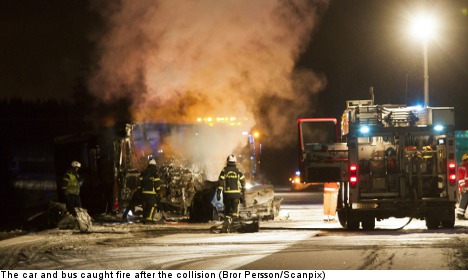 “The car was driving at high speed and went right into the bus, according to witnesses,” Tomas Wikström of the emergency services in Luleå told the TT news agency.

The accident occurred on Sunday afternoon in Gammelstad, near Luleå in Sweden’s far north.

The woman was alone in the car, which was driving on the wrong side of the road when it collided head-on with the bus. She died later in hospital.

Both the bus and car burst into flames after the impact.

“It was like in a film, I just saw how everything lit up in front of me and then “bang”. I flew to the ground and hit my head,” bus passenger Sanna Anehagen told the Expressen newspaper.

“There were small children on the bus and they started crying, everyone was in shock.”

Of the 15 bus passengers, ten were taken to hospital including the driver.

There was a complete stop in traffic for several hours following the crash. Police were even on hand with sniffer dogs to ensure no passengers were in the vicinity after the violent collision, but found none.

Authorities have pointed to the bad weather and slippery roads as possible causes of the accident.

“It’s quite cold and there has been a great deal of snow, so it may have been this,” Wikström told the Aftonbladet newspaper.