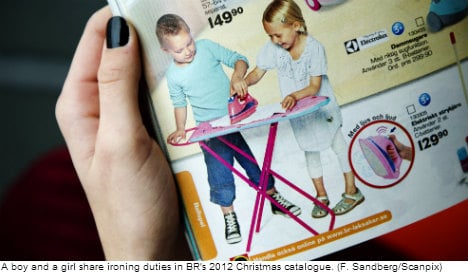 “Boys will be girls, as they say in Sweden,” finance writer Thomas Pascoe wrote in a post published last week in the blog section of The Telegraph’s website.

He went on to argue that Sweden’s anti-discrimination laws are “insane” and lead to “bizarre” outcomes which do little to improve the status of women in Swedish society, citing figures showing a persistent wage gap between men and women.

“The result of stripping women of their social roles as mothers has not been the development of a new balance in society which still respects women, but rather a sexual nihilism with which most women are instinctively uncomfortable,” he wrote.

The sideswipe against Sweden’s gender-equality efforts came on the heels of reports that Toys”R”Us had produced a “gender neutral” toy catalogue for consumers in Sweden which features images of boys offering dolls a toy bottle, as well as little girls taking aim with plastic rifles.

“No boy grows up dreaming of being a princess. I find it hard to believe many little girls grow up wanting to shoot people,” wrote Pascoe.

She explained she was addressing her open letter to “Fred Flinstone”, because Pascoe “seems convinced that we still live in caves“.

The Expressen columnist then rips Pascoe for connecting images of boy playing with toy vacuums to Swedish women’s “sexual nihilism”, asking why he thinks femininity “needs to be affirmed through sexuality in the absence of clear mothering”.

Surveys have shown that men who share housework with their wives have sex more often, adds Strömstedt, going on to promote the benefits of Swedish laws which provide incentives for fathers to take parental leave.

Refusing to take Strömstedt’s critique lying down, Pascoe on Monday published his own “open letter to the women of Sweden” emblazoned with an image of the Swedish Bikini Team.

“I am struck by the fact that both genders in your country seem to have lost a role and not yet found an argument to justify the fact,” he wrote.

According to Pascoe’s, the Swedish columnist’s decision to compare him to Fred Flinstone is equivalent to likening Strömstedt to Elin Nordegren, the Swedish ex-wife of star golfer Tiger Woods, because “you appear to have blonde hair, blue eyes and an attitude which would make you dangerous with a golf club”.

“Sweden’s approach to gender differences has been to attempt to legislate them away. It hasn’t worked,” he concludes.

“A society which views female liberation as liberation solely from the bounds of sexual shame is misogynist, not feminist.”

Despite the heated exchange, the two writers did manage a more cordial exchange on Twitter, with Strömstedt offering to buy lunch for Pascoe, who accepted, but insisted he pay for the “over-taxed drinks from the state alcohol monopoly”.