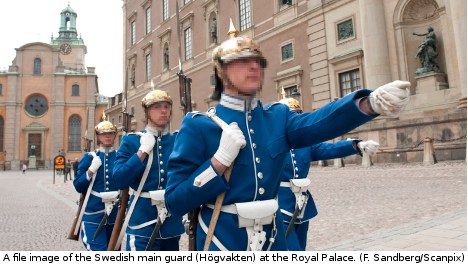 In an internal report, the military said a superior officer noticed that the 25-year-old was so hungover that he was unfit for duty with the main guard (Högvakten) at Stockholm’s Royal Palace.

“During my inspection, I found the soldier unshaved, with red eyes and snus in his mouth, leading me to suspect he was intoxicated,” the officer reported.

The guard confessed that he had drunk seven pints of beer between 5pm and 3am the previous night.

The incident in September was not the first that involved drinking for the young guard.

In June, also under the influence of alcohol, the soldier had picked up a knife in a female colleague’s room and told her to “lie still”.

A second colleague, who had been out on the town with him that evening, wrestled him to the ground and pulled him out of the room.

“It was not perceived as threatening, rather as a drunken prank,” the military said in its report about why the woman had not reported the incident to her superiors at the time.

However, after learning of the soldier’s second incident at the Royal Palace, the female soldier then chose to report the incident.

“Sometimes he just loses it and does odd things,” she told superiors when questioned.

“Because both these incidents involve alcohol, I recommend that his eligibility for rehabilitation be assessed,” the man’s superior wrote.

“He should also lose a substantial part of his salary for breach of duty.”

The guard himself told superiors he should not be singled out among the many soldiers who went partying the night before showing up for duty.