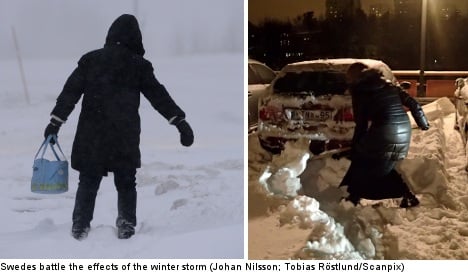 Class 1 warnings remained in effect for large parts of eastern Sweden on Thursday, with up to 30 centimetres of snow expected in some areas, according to Swedish meteorological agency SMHI

On Wednesday, heavy snow temporarily shut down the airport, with an estimated 60,000 passengers affected by the storm.

“We have some minor delays and a few cancelled flights this morning, but those are the results of problems from yesterday,” Klas Nilsson, spokesman for airport operator Swedavia, told the TT news agency.

“We expect things to return to normal by midday.”

CLICK HERE FOR MORE IMAGES FROM THE SNOW STORM

Dangerous road conditions continued to plague many parts of the Stockholm region in the wake of Wednesday’s heavy snows and strong winds, according to the Swedish Transport Administration (Trafikverket).

As the storm moves north, conditions on roads in northeastern Sweden are expected to deteriorate throughout the day on Thursday.

“If you have to go out, be sure to take it easy, allow plenty of distance, and don’t get stressed,” spokeswoman Beisi Sundin told TT.

Slick and snow-covered roads contributed to a number of accidents overnight, leaving many vehicles in the ditch, but no serious injuries were reported.

On highway 44 between Lidköping and Källby, a bus with 20 passengers on board skidded off the road on Thursday morning, landing on its side.

Police said it was too early to know the extent of possible injuries, but early indications were that no one was seriously hurt.

Meanwhile, Sweden’s passenger rail system continued to be plagued by snow-covered tracks, as well as several malfunctioning switches, with rail operator SJ expected to cancel several trains throughout the day on Thursday.

“They especially affect routes between Gothenburg and Stockholm. Those who are planning to travel should get more information ahead of time,” said Sundin.

In Stockholm, public transit systems have recovered for the most part following a day which saw the bus service brought to a halt in the city centre as well as major disruptions to commuter rail service.

While Stockholm’s buses are up and running again, several routes continue to experience delays.

However, roads have yet to be plowed in many outlying regions of the Swedish capital such the archipelago, Nynäshamn in the south, and Norrtälje in the north, resulting in continued problems for commuters.

“People are going to have to have a little patience, but we are optimistic.”