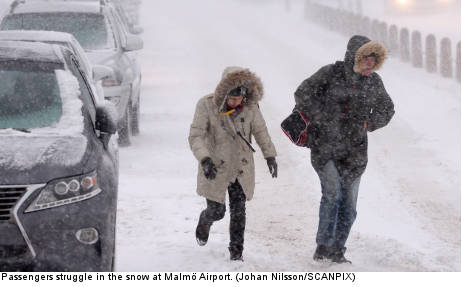 “Unless you absolutely have to go out, you should stay at home and if you really must go out then you should count on longer journeys than normal,” said Therese Fougman, a meteorologist at SMHI.

SMHI issues class 2 warnings when weather conditions could put the public in danger, cause material damage or disruptions to vital social services.

The Skåne blizzad is expected to bring up to two decimetres of snow before tapering off during the early hours of Monday.

On Sunday conditions were particularly harsh in the southern parts of Skåne. Overall, the temperatures in the region ranged from zero degrees Celsius to just below freezing.

SMHI also issued a class 1 warning – meaning weather conditions that can involve some risks and disruptions – for Halland and Blekinge counties, two other southern regions where snowfall, windy weather and between five and 15 centimetres of snow were expected on Sunday.

Trains between the towns of Helsingborg and Ängelholm were cancelled from 12 noon because of the blizzard.

Two airplanes heading for Malmö Airport, in Sweden’s third largest city, had to be rerouted on Sunday afternoon because of the weather conditions. The passengers then had to travel to Malmö on a chartered bus.

Copenhagen’s Kastrup airport, which is used by many Skåne residents, also experienced delays and some cancellations.

In the rest of Sweden, there were few disruptions on Sunday as there was mostly light snowfall and normal winter weather.

SMHI urged Swedes to stay updated about local conditions by checking for news on the internet, radio or television.