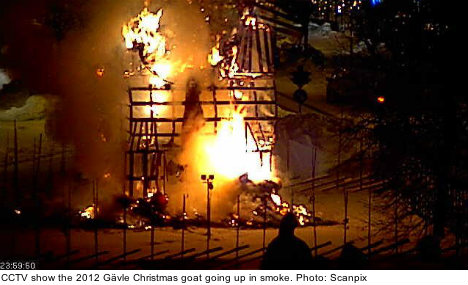 When emergency services reached the scene the straw structure had already been completely destroyed by the fire. No one was hurt in the blaze.

The site in central Gävle has been cordoned off and police have opened an investigation into vandalism.

CLICK HERE FOR A CLOSER LOOK AT THE BURNING GOAT

“Personally, I think this is a shame. It’s fun that the goat is so famous but it would also be nice if it could be left alone,” he said.

Meanwhile, Eje Berglund, chairman of the Gävle goat committee, explains that it’s not just the curiosity of Gävle residents that is piqued when it comes to their iconic straw goat.

“There’s an enormous interest worldwide in this goat. Of course, the fact that it burns down contributes to this as people want to see if it will stay standing or not,” he told the TT newsagency.

“So it’s even a kind of an advert when it’s on fire. But we do want it to stay standing as long as possible.”

CCTV footage showed as many as three or four potential suspects prowling around the goat minutes before it went up in flames.

The police do not know how the arsonists managed to set fire to the goat, as the fire brigade had hosed it down earlier in the evening and it would have frozen almost instantly.

The goat’s ghostwriter wrote on its merjuligavle.se blog, in somewhat broken goat English:

“I’m sorry to say that tonight at midnight someone couldn’t keep their fingers away. I suddently woked up, It became awfully hot I noticed that I was on fire!”

“The last hour was here!”

The goat expressed its regret at missing Christmas, but promised to be back strong again for the 47th time next year.

Calls made by The Local to Gävle municipality for comment were not immediately returned.