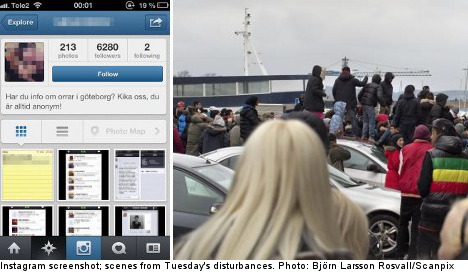 The girl is being formally investigated for slander by prosecutors, who filed a motion that she be assigned a public defender.

“I’ve been interrogated by the police. But I’ve been falsely accused. I haven’t done this,” the girl told the Expressen newspaper, claiming that others were responsible for starting the Instagram account.

She explained that her picture was among the roughly 200 images of boys and girls exposed on an Instagram account asking for tips on “sluts” in Gothenburg.

The postings included names, alleged sexual activities, and often used racist slurs in describing the children, some of whom were as young as 13.

The 17-year-old girl said she sent an email to the account administrator threatening to file a police report if they didn’t remove her picture.

While the picture was eventually removed, the girl claims whoever was behind the account then spread rumours online that she was managing the account, something she adamantly denies.

“It’s really frustrating. The people who did this should sit at home and be ashamed,” the 17-year-old told Expressen.

When she arrived at school on Tuesday, police were already in place in anticipation that gathered students might become violent. School officials urged her to go with police for her own safety.

The gathered students eventually turned violent, throwing bottles at police and climbing on cars before moving over to the nearby Nordstan mall where the disturbances continued into Tuesday afternoon.

A total of 27 young people were detained by police, who later explained that roughly a dozen of the estimated 100 youths were responsible for instigating the violence.

Concerns for the girl’s safety remain so high that she and her family have been moved to a secret address following her interrogation by police.

“I don’t know when I’ll return to school. The police will decide that now. I’m staying where I am. I’m going to stay safe,” she told Expressen.

The Plusgynmasiet high school where the girl is a student and where Tuesday’s disturbances began will remain closed on Wednesday as a precaution.

In addition, local education officials plan a review of the school’s policies for working with values.

Meanwhile, a number of “copycat” Facebook and Instagram accounts sprouted up late Tuesday night, according to Swedish media reports.

According to Aftonbladet, young people in Gothenburg have been urged to start new disturbances on Wednesday via a mobile phone text message chain that was sent to a number of teens on Tuesday night.

The local Göteborgs-Posten (GP) newspaper reports that police have received more than 40 complaints of slander in the wake of the degrading posts on Instagram and Facebook which include claims about their sex lives.