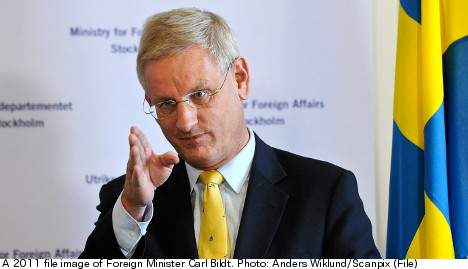 Turkey launched formal accession talks with the European bloc in 2005 but they have made little progress because of the quarrel with Cyprus as well as stiff opposition from some EU member states.

Brussels has opened only 13 of the 35 policy chapters that every state must negotiate in order to join the bloc. Just one chapter has been successfully closed.

The talks have stalled over problems relating to the ethnic Greek government of EU member Cyprus, a Mediterranean island divided between Greek and Turkish Cypriots, as well as stiff opposition from certain countries including France.

Bildt hoped that Turkish-EU talks would gain a new momentum in the coming year.

“I do think that there are positive signs, so we will work on that,” he said.

As a staunch opponent of Turkey’s EU membership bid, France has blocked five chapters on the grounds that opening them would lead to full membership.

But the French objections came from former president Nicolas Sarkozy who argued that Turkey was not part of Europe.

Ankara now expects Paris to lift its veto on the five chapters under Socialist President Francois Hollande, elected in May, who has shown himself to be more open to Turkey’s EU ambitions.

Turkey’s EU Affairs Minister Egemen Bagis has spoken of mending fences with Paris in a friendly spirit of finding solutions.

“We are hoping that he (Hollande) would open a new page in the very deep and fruitful historical relations between Turkey and France,” Bagis told AFP back in May.

For his part Hollande has noted that Turkey would not become an EU member during his five-year term – the road to EU accession is a long one.

“I think it is too early to tell,” Bildt said when asked if there were signals from France over a policy change.

“And you will have to wait for the French to state their own position. There are countries where there is opposition but all of the countries are united with the slight exceptions … that we should conclude the negotiations,” he added.

Turkey is under fire from Brussels for stalling democratic reforms and a lack of sufficient progress in improving its human rights record.

Ankara however rejects those accusations, and says the EU focuses on shortcomings in the Turkish bid rather than on the reform effort itself.

Bildt said most of the problems stemmed from Turkey’s “fairly old constitution” made by the junta after the 1980 military takeover.

He hoped that progress would be made towards the new constitution and the judicial reforms which would address problems.

Bildt also said he did believe Turkey would join the EU.