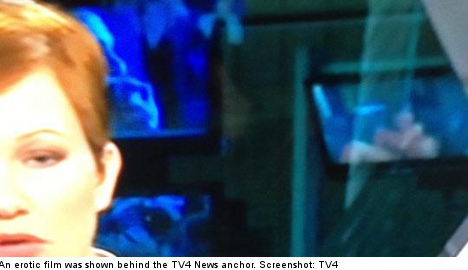 “At first I realized I was looking at a naked woman and it quickly became clear she was having sex,” Danyal Ek, a 23-year-old student from Lund in southern Sweden, told The Local.

The incident took place during a Monday morning broadcast on 24-hour Swedish news channel TV4 News as the presenter was interviewing the station’s Moscow correspondent for reaction in Russia to the Syrian president’s speech at the weekend.

As the two journalists discussed Russia’s support of for the Syrian regime, a pornographic film began playing on one of the television screens situated behind the anchor.

“The image wasn’t exactly in focus, but it wasn’t hard to figure out what was going on.”

“Put simply, it’s crap that it happened. We’re going to do everything we can so that it doesn’t happen again.”