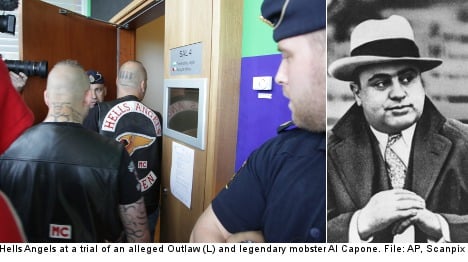 “Organized crime can be motivated by a lust for power but much of it is about making money,” said Bergman, who works for the Tax Agency.

Much of the tax authorities work focuses on organized crimes networks that operate in industries perhaps not traditionally associated with the stereotypical image of the gun-touting, sex-selling mobster.

“There are many ties to unregistered labour, where there is a lot of money to be made,” Bergman said.

The networks’ activities range from sending out false invoices or faking disability or illness cases to cash in on welfare benefits, to operating in normal industries without paying taxes or social security contributions for the employees.

“The cases are becoming ever more complex,” Bergman said.

“We get better at investigating them but that forces the criminal underworld to modify its tactics.”

For example, some networks now use companies registered abroad in their operations. And as far as money laundering goes, the criminals have added several more steps to hide their trails.

“Ten years ago it was often a cash-in-hand, under-the-table operation, but now they are hiding behind documents, not only to make it look clean but to confuse us,” Bergman said.

“The facades of organized crime are neater and at the same time more complex.”

Since 2009, her unit has investigated 2,800 cases, pertaining to individuals or to specific groups.

According to a case review by regional newspaper Helsingborgs Dagblad, many of the cases have links directly to well-known gangs such as Bandidos, Outlaws, Black Cobra and the Syndicate Legion.

Many of their more prominent members lead “bling-bling” lives of luxury, with nothing to show for it on official tax records.

“They’re living large, out partying in the clubs but they don’t pay a single krona in tax,” said Bergman, who says articles about high-end nightclubs around Stockholm’s Stureplan sometimes offer clues.

Once her unit opens an investigation, they often ask a court to issue a “payment guarantee” (betalningssäkring), which makes it harder for suspects to hide the cash once they learn they are under investigation.

“I’d say we apply for it in 30 to 40 percent of cases, because if there is one thing we’ve learned it’s that cash disappears quickly,” Bergman said.

The aim is not only to recuperate outstanding taxes and disturb the money-motivated criminal networks, but to help legitimate Swedish companies that are forced to compete with illegal outfits.

“Last year we claimed back 1.3 billion kronor ($200 million). That money means a lot to taxpayers like you and me who would like to see it spent on better things. But I’d say serious companies also lose the same amount every year due to unfair competition.”