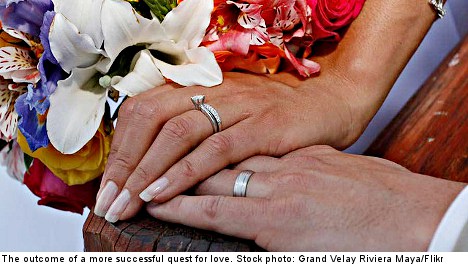 She said the site was “not offering good value for money” and accused the company of misleading advertising.

The woman signed up to the online dating site in November last year for a three-month stint and filled in the extensive questionnaire that eDarling, the European trading name for US dating giant eHarmony, bases its matchmaking services on.

But she soon found the lack of a search function discombobulating. And the love-lorn woman says the fact that eDarling only sent her three partnership proposals a day left her frustrated, especially as “almost half” of the suggest profiles did not include a photograph.

“You know, once you see what they look like you often don’t keep reading,” the woman, who works in healthcare in Stockholm and asked to remain anonymous, told The Local.

“Why can’t I look around, how do they know what I want? They just told me that sending out more partnerships proposals risked overwhelming the user.”

Edarling reacted to news that the company had been reported to the Consumer Agency with surprise.

“I am a bit bewildered by the complaint as we think our website is very clear about how our service works, and usually a customer will usually ask for their money back first if they are unhappy.”

The 43-year-old’s complaint to the Consumer Agency shows she does not agree that the site was clear on the matter.

“Once you’ve paid and finally get to log in did it become clear you get three partnerships proposals a day,” read the letter that was sent in as marketing complaint.

Regli said that while some of eDarling’s competitors offer up to 200 partnership suggestions daily, their business model focused on “quality over quantity”.

The 43-year-old woman ended up going on one date, but said there were no sparks between her and the “very nice man” she met up with.

Over the holiday period, eDarling ramped up its marketing on Swedish television. At the end of every advert, their slogan “for singles with high standards” (för dig med höga anspråk) would rile the 43-year-old further.

“I’m lucky, I signed up for only three months, but a friend of mine signed up for a year and she’s doesn’t even check the site anymore,” the woman said.

“Although I want to point out that it is not the quality of the men on the site that is the problem, it’s the entire structure of the site that I dislike.”

Edarling representative Sibylle Regli said many of their existing customers actually chose the dating site over many others because of the restrictive selection.

“It really was the wrong product for this customer,” Regli told The Local.