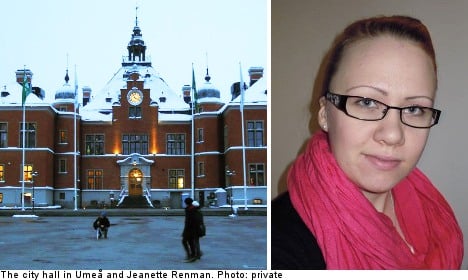 Jeanette Renman, a multi-lingual 24-year-old Swede, is a native of the north and found herself in Umeå one year ago with her fiancé. She presents: My Umeå.

So, tell us a little bit about who you are.

My name is Jeanette, and I was actually born and raised not far from Umeå. “Not far” meaning about 140 kilometres further inland, but distances are relative in northern Sweden. I work as a communicator right now, and have studied rhetoric and languages in Uppsala.

Nice to meet you. Now, let's talk about Umeå. Is there anything it’s well-known for?

Yes. Umeå has recently been on the international scene for a few things. It’s the European Capital of Culture for 2014 along with Riga, Latvia. Also, there was a man who lived in his car for three months last winter drinking melted snow to survive. The city was also the home of Stieg Larsson, the writer of The Girl With the Dragon Tattoo.

Not bad. The city was also in the headlines recently for its happy lights at the bus stops. What did you think of those?

I liked them, it made the waiting for the bus a little different – and a lot brighter. But just as the bus drivers said, it made driving quite a bit dangerous. It was okay when you biked, walked, or were in a car, but for drivers…it felt just like a car was driving towards you with the high beams on. But they were only there for six weeks and they've been replaced now.

Gallery: Take a walk in Umeå through the eyes of Jeanette

If you had a visitor for one day, what would be included in your tour of the town?

Right now, Umeå is a growing city. That’s a fancy way of saying that it’s full of cranes and scaffolding. But I would take my visitor to the Västerbotten Museum.

I like it because it tells the story of how life in Västerbotten has evolved over the last 10,000 years. It has the world’s oldest ski too, which is over 5,000 years old – even older than the Egyptian pyramids.

What about the people in Umeå. The Ume-ites? What are they like?

The people in Umeå are very welcoming and happy to have you here. You feel the spirit of the norrlänning, meaning Northern Swede. We all trust the people we meet, and we’re happy to sit and talk to anyone who'll talk back. Even though there's a stereotype that says we never talk, we actually have to in order to keep warm.

Speaking of warming up, where's the best place to get a coffee?

There are quite a few places to go, but my favourite place to go for a fika is Kafé Station. It’s a coffee shop where they make everything themselves, everyone is welcome – and the building used to be a fire station in the 1800s, hence the name.

Where is your smultronställe (your favourite place to be)?

I really like IKSU, a fantastic gym not far from where I live. It’s the largest sports facility in northern Europe where you can play beach volleyball all year long. Indoors, of course. A lot of students go there to let off a bit of steam, but ordinary working people like me go there too.

Tell me something about the town that people might not guess.

Well, Umeå is very dark during the winter. In fact, one week in December, I think there were only seven hours of sunlight for the whole week.

It might seem like self-torture to live here after hearing that, but when the sun starts to shine again and every fibre in your body is filled with light, energy and pure joy – it’s worth it. In summer, the sun shines for 24 hours, which is pretty amazing in itself.

And finally, what’s the one thing a visitor simply cannot miss?

The people. Talk to them, joke with them, start discussing politics or music. Just let the people from Umeå near your heart. I’ve heard several people say that someone from Umeå might seem distant at first, but a friend from Umeå is a friend for life.