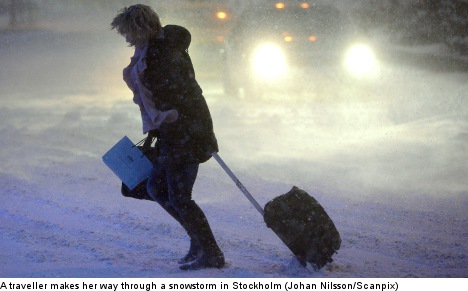 A low pressure system passing over Estonia is pushing snow storms in the direction of the Swedish capital, with experts warning residents to take heed.

“The snow will continue for a good part of the day, and it’s good for people to be aware of it,” meteorologist Jesper Blomster at Swedish weather agency SMHI told the Aftonbladet newspaper.

SMHI has issued a Class 1 warning – meaning weather conditions that can involve some risks and disruptions – to Stockholm, Uppsala, and the area in between.

The agency predicts up to 15 centimetres of snow to fall by Monday afternoon.

“It will be slippery on the roads and in the centre of the cities it will get messy as it’ll be harder for the snow plows to get in there,” Blomster told the paper.

Further north, the lower regions of Norrland are also expected to be hit by the storm, though likely not as harshly as its neighbours to the south.

The rest of the country can expect to miss the storm, however the week looks cloudy for most parts of Sweden.