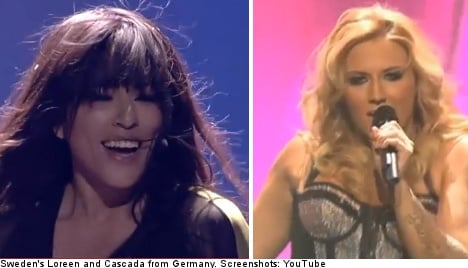 State broadcaster NDR said it had “commissioned a musical audit” to examine claims that the song Glorious by German band Cascada, chosen Thursday to represent Germany, was a rip-off of Euphoria by Swedish artist Loreen.

NDR spokeswoman Iris Bents said the station would publish the results of the study when they were available but played down the allegations.

Video of Glorious by Cascada

“Every year there are attempts to create scandals around the Eurovision Song Contest and the participants,” she said.

She said the catchy techno-pop song Euphoria, which smashed the competition in 2012 with a massive 372 points, had also been accused of being a copy of work by French DJ David Guetta and Barbadian pop star Rihanna.

The producers of Glorious have rejected all allegations, Bents said. Cascada’s lead singer Natalie Horler, who was born in Germany to British parents said “if you like, we can superimpose one song on the other. They are two different songs.”

But according to a phonetics expert quoted in the Bild am Sonntag weekly, the two songs are “absolutely identical” at the beginning.

“The chorus uses the same accentuation, the ending peaks with the same combinations. The singers even use the same breathing methods,” said the expert, Tina John.

The Eurovision Song Contest, an annual pop music extravaganza broadcast across Europe but also in dozens of countries around the world, will take place this year in the southern Swedish city of Malmö on May 18th.

Every year hopefuls from 26 countries compete in the final, hoping to become the new Abba and avoid the dreaded fate of ‘nul points’ – picking up no points from the jury.

Sweden is still in the process of picking its Eurovision entry, with the final heat of the Melodifestivalen qualifier scheduled to take place on Saturday in Malmö.

The Melodifestivalen finals will be held in Stockholm’s Friends Arena on March 9th.