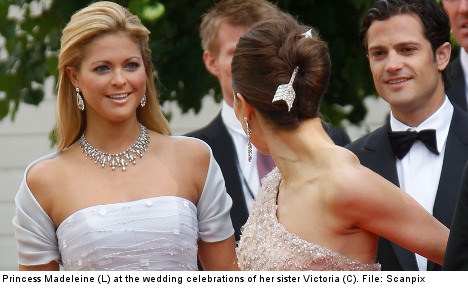 The princess, fourth in line to the Swedish throne, will marry financier Christopher O’Neill at the palace church (Slottskyrkan) in Stockholm on June 8th.

“There’s only four months left!” she exclaimed in a statement on the Royal Court website.

“Time flies when you’re having fun. We’re in the middle of planning.”

O’Neill, who has dual UK and US citizenship, will have a best man at the nuptials, while the Swedish princess will not ask her friends to stand in as bridesmaids (brudtärnor), but instead invite the children of family and friends to accompany her down the aisle (brudnäbbar).

“Just like my mum and my sister did, I will have brudnäbbar. It’s a wedding tradition that I want to carry forward.”

She said wedding invites would be put in the post on April 1st, and said she regretted that she could not invite everyone that she would like to.

The afternoon ceremony in central Stockholm will be followed by dinner at Drottningholm Castle, just west of the city.

“Drottningholm means tremendously much to me as I was born and grew up there.”