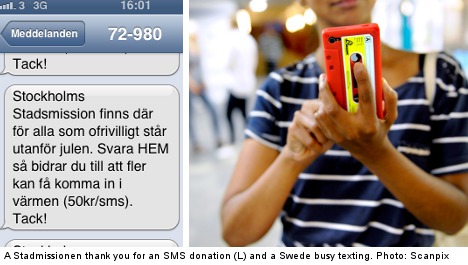 The Swedish Red Cross has reported a 92-percent drop in SMS donations since Swedish mobile operators required their customers to register online, including the submission of sensitive personal information, in order to greenlight a money transfer via text message.

He said many young people use text message payments to give money.

The additional steps, in addition to being cumbersome, have also raised privacy concerns among those wishing to use their mobile phone to transfer money despite claims by WyWallet, which is owned by mobile providers Telia, Tele2, Tre and Telenor, that it does not share any personal information with third parties.

The Red Cross is not the only charitable organization in Sweden to have noticed the new service’s effects.

“The development worries us. It could severely affect how we raise money when a catastrophe takes place, when many people give donations via SMS.”

“It is important to underline that this affect the people who are suffering the most, such as people in Syria,” said Wilhelmsson at the Red Cross.

“Maybe they’re not getting the help that they could have gotten.”

WyWallet’s head of marketing Adam Hasslert told TT that the payment services law requires that a client be identified before a transaction is made.

The TT news agency, meanwhile, noted that the law does not require all mobile payments to be subject to client registration.

Allowing the charitable organizations to get its SMS campaigns going again, however, would require that the mobile operators to turn the service back on, TT reported.