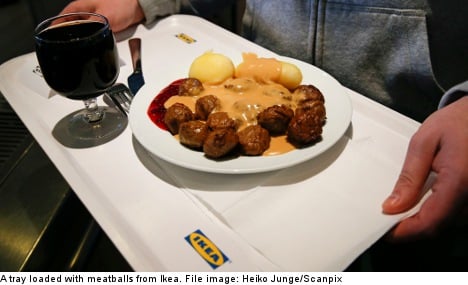 Gunnar Dafgård AB, the main Swedish meatball supplier for Ikea stores in Europe, announced on Monday that following 1,000 DNA tests it had found the source of the horsemeat.

“We’ve traced the horsemeat to a Swedish supplier who had contracted with two Polish slaughterhouses,” Ola Larsson, spokesman for Dafgård, told The Local.

“At this point, however, we don’t know where exactly in the chain the crime took place.”

Dafgård has presented its findings to relevant authorities and has contacted its lawyers, in addition to filing a formal complaint with the police.

The company had initially denied that its products contained any horsemeat, but retracted the statement on Wednesday when in-house tests revealed traces of between 1 and 10 percent of the offending meat.

The company has now claimed to be making a push to ensure the meat mix-up will not occur again.

“We’re working together with the relevant authorities and industry organizations to ensure nothing similar occurs in the future,” Magnus Dafgård, company CEO, said in a statement.

“We have a real understanding of our customers’ concerns. Now that the meat has been traced to a supplier, we have prevented the raw meat from that supplier from being sold and have carried out further tests.

“We would like to emphasize that this is purely a precautionary measure,” he added.

The horsemeat scandal has made headlines around Sweden for the past few weeks ever since meat from Swedish supplier Findus was found to contain horse in products around several European countries.

The scandal widened last week when horsemeat was found in meatballs sold by Ikea, prompting the Swedish furniture retailer to launch a massive recall of the iconic Swedish dish, as well other meat products.

The products containing the horsemeat have since been recalled from Swedish supermarkets and sent to waste factories to be converted into biogas.