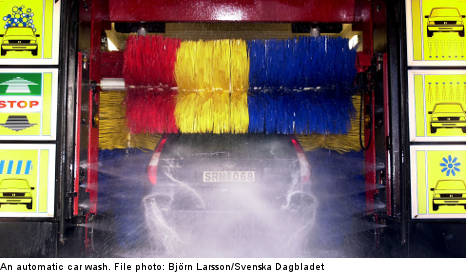 “My son’s first comment when I got out was ‘well, now you’re clean at least’,” the man told local paper Smålandsposten (SMP).

The 82-year-old, Tage Schill, was seemingly in good spirits after the ordeal.

He had accidentally started the automatic car wash when passing a sensor, which put the system in motion.

“It was frightening and terribly noisy. I couldn’t hear or see anything and I was trying to get out of there,” said Schill who had gone into the car wash area to clean up.

“I didn’t notice that a woman had put her card in to drive into the automatic car wash,” said Schill.

“I only realised when the car wash suddenly kicked in and water splashed from all directions. And there I was in the middle of it all.”

“I got washed instead of the car.”

Luckily, Schill managed to escape unharmed, although he did get completely drenched.

“The woman rushed out of her car and apologized, but it wasn’t her fault. Not in the least,” said Schill.

The gentlemanly octogenarian ran into the petrol station shop to get the woman a new, complimentary carwash pass before driving home to put some dry clothes on.

He was not injured during the incident.