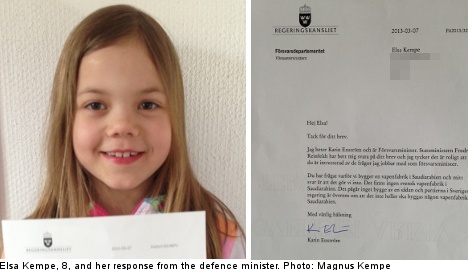 Elsa Kempe, who lives with her family in Lund in southern Sweden, was disturbed to hear reports several months ago that Sweden was engaged in helping Saudi Arabia build a weapons factory.

The news was all the more frustrating for the precocious young girl because she had previously been told by Prime Minister Fredrik Reinfeldt that he was working to reduce weapons.

“She first wrote to the prime minister about a year ago after seeing so many news reports about weapons in Sweden,” her father Magnus told The Local.

“She asked why weapons exist in the first place and Reinfeldt wrote back saying he was doing his best to get rid of the weapons.”

But news of the Saudi arms scandal, in which a branch of the Swedish military set up a shell company to provide assistance to the Saudis in their efforts to build an arms plant, left Elsa feeling that the prime minister was sending mixed messages.

Thirsting for the truth, Elsa put pen to paper again in January hoping Reinfeldt would be able to clarify matters.

“Hi Fredrik! Last year I wrote a letter to you wondering why there are weapons in Sweden. You wrote back that you were working to get rid of weapons,” she wrote.

“Now I’ve learned that you are helping Saudi Arabia to build a weapons factory. That seems REALLY STRANGE. Isn’t it more important that they are doing okay?”

Rather than respond directly to Elsa’s probing questions, Reinfeldt elected to pass the letter along to Defence Minister Karin Enström, who did her best to assuage Elsa’s concerns.

According to Elsa’s father, his daughter wasn’t totally happy with the defence minister’s answer.

“I think she had expected a more detailed explanation than she received,” he said.

Magnus explained that Elsa is an avid viewer of Lilla Aktuellt, a news programme on Sveriges Television (SVT) geared toward children, and that she asks lots of questions about what she sees.

“We discuss a lot of this at home but she’s never been moved to write a letter to the prime minister about any other issue,” he explained.

“It’s great to see her take the initiative. It’s really exciting to see that she wants answers, and even cooler that she’s gotten them.”