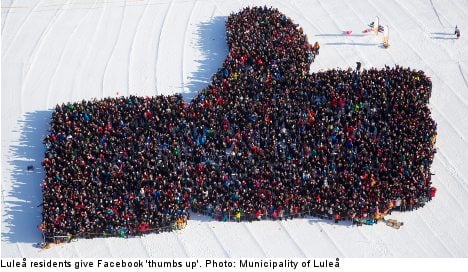 “Today, we gave a thumbs up for Luleå. I’m proud of how we together, through hard teamwork, year after year manage to grow and evolve,” said Karl Petersen, Mayor of Luleå in reference to the shape that the group made on the ice.

The “thumbs up” inititiative was timed to coincide with the 75th day of the year – March 16th – to recognise the continued growth of the town past 75,000 residents.

The Guinness World Record attempt was made on a lake in the middle of the town harbour and has been submitted for consideration for the achievement of having formed the biggest human hand on ice.

Located in the far north of Sweden, Luleå is above the Arctic Circle and thus in the winter months there is no shortage of frozen lakes and winter temperatures can drop to as low as -40 degrees Celsius.

After decades of depopulation the municipality has begun growing at a rate of around 3 percent since 2000.

The city has become an attractive place for tech companies, notably Facebook which has built a new server hub in the town.

The “thumbs up” symbol has been explained as a gesture to Facebook after the completion of the company’s facility, its first outside of the US.