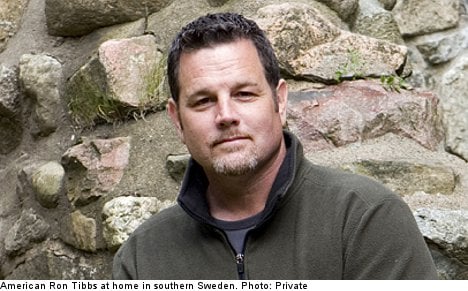 Tibbs, a 49-year-old American, left the Marine Corps to work as a policeman “chasing the bad guys” in California. Now retired after being injured in the line of duty, he finds himself happily married and living in Skåne, southern Sweden.

“I love it down here, I couldn't ask for more,” Tibbs tells The Local.

“It’s beautiful, the people are friendly and welcoming, and it's such a tranquil location. What I love about Sweden is that they don't overdevelop things. The countryside is so uncluttered. If it doesn't need to be developed in Sweden – it isn't.”

Tibbs lives with his wife Jeanette in a house by the Oppmanasjön lake midway between the towns of Kristianstad and Årkelstorp (“I call it Erkelville,” Tibbs jokes, “My Swedish pronunciation has a long way to go”).

According to the Ohio native, it's hard to find a more scenic setting than his own isolated corner of Sweden.

“The view from each window of our 100-year-old farm house is like taking a trip to a nature reserve. Elk, deer, foxes, badgers, countless bird species, wild boar… It's just so peaceful. It's hard to describe the sensation of hearing nothing yet feeling connected to everything around you,” he says.

But it's not only Tibbs and his wife enjoying the serenity. Tourists and Swedes alike have ended up on his doorstep curious to find out more about the nearby buildings and the idyllic scenery.

“We've had people pull up in their cars asking if our house was a restaurant,” the 49-year-old says.

When the couple realized the barns near their home were being converted into a set of shops and boutiques, they snapped up the opportunity to stake their own claim on one of the stables.

“It dawned on us that we should open an old-school fika place, not like Starbucks or anything, more like the kind of fika you’d have if you visited your grandparents. Proper Swedish coffee and cakes. So we got started,” Tibbs explains.

IN PICTURES: The coffee-shop, mid-restoration

Now, the structure is in place for the café – to be named Fika Hos Lillan – and Tibbs has toiled on the transformation from pig house to coffee house, taking special care to source material from around the region to maintain that southern Swedish feel.

He plans to add a book exchange, authentic old furniture, and has already collected bricks, barn posts, and beams from other abandoned structures in the area.

The building, like their home, backs onto the lake, and a whole host of bike tracks and walking opportunities.

“We thought we'd provide the nature-lovers with the picnic food before they leave, or that much-needed coffee afterwards.”

However, plans for the August launch took a turn for the worse when the couple's personal funding ran out and Tibbs was refused a bank loan.

IN PICTURES: Take a walk around Ron’s farmground, and see the animals and nature at their wildest

“I found out that I'm not recognized by the banks because I have no employment history in Sweden. We’re looking into the possibilities of crowd sourcing at the moment to continue with the dream.”

“You don't know anyone in the business, do you?” he adds with a laugh.

While he admits a TV programme might be a long shot, Tibbs is content to be living in his own paradise with spring and its opportunities not far away.

“We certainly enjoy our little corner of Sweden, hopefully we'll inspire others to visit,” he tells The Local.

SEE ALSO: A list of The Local's past My Swedens