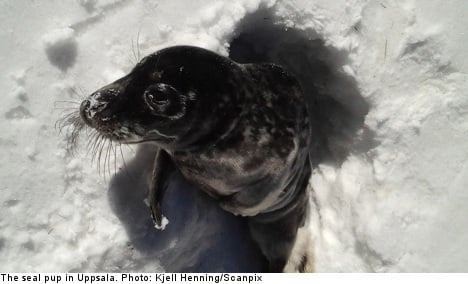 “A somewhat confused person called and said he was out walking in the woods where he had found a seal pup. I thought he was joking at first,” Uppsala police inspector Henrik Pederson told news agency TT.

Hunter Robert Sandefors, who was asked by police to take care of the pup, said the seal had probably made its way into the woods on its own, based on tracks visible in the snow.

Sandefors at first though that perhaps the seal had been caught and then dropped by an eagle a long distance from its natural habitat.

“But there were no signs of injury on the seal. It was completely unharmed,” he said.

“He must have gotten separated from his mother and gotten lost and gone in the wrong direction,” Sandefors told public broadcaster Sveriges Radio.

The seal was taken to the nearby Dalälven river, where it was released and swam away.