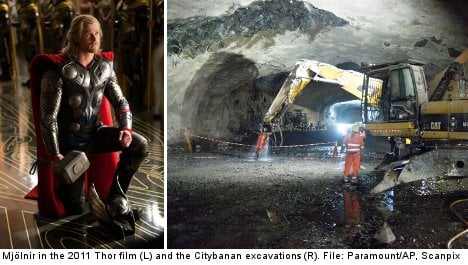 The hammer was found in the granite bedrock of Södermalm island in Stockholm, where engineers are excavating a tunnel to redirect the suburban commuter trains in one of the capital’s biggest infrastructure investments since the metro was built.

“It was a case of shock and awe when one of my engineers recognized engravings on the object to be Norse runes,” Citybanan project manager Johan Leber told The Local.

“I at first thought it was piping sticking out of the ground,” added engineer Rav Pidertni.

“There are caverns underneath Södermalm, like the one they use for the Midnight Run half-marathon, but nobody had told us to expect running into other pre-existing sites.”

Upon closer inspection, the object was discovered to be a handle, not piping, but as the Indian-born excavation expert was not familiar with Norse myths he didn’t recognize what turned out to be rune writing.

“I reacted instead to the object being made of metal and heavily engraved, beautifully so, in fact,” Pidertni told Swedish archaeology trade publication Stenarna (‘The Stones’).

The excavation team then alerted management, who in turn asked city hall for guidelines. Much of the project has focused on keeping vibrations from the blasts at a minimum in order not to damage architectural landmarks above ground.

“As we’re going straight through the bedrock, we never expected to encounter anything down here,” said Leber.

Although analysts have yet to identify the metal, experts told Stenarna it was likely a complex alloy, as there was no oxidation on the surface of the giant hammer.

The object, engraved in intricate runes and lightning bolts, measures more than 60 centimetres from handle to head. Once removed, experts said it would likely weigh more than 50 kilogrammes. Because half of the hammer head is still stuck in the rock, archaeologists have said they do not want to release the translation of the runes to the public before they can access the entire text.

Several question marks remain, however, not only because there are few known replicas of the thunder god’s hammer, but also because the location in which it was found sheds little light on its provenance.

Although a new ecosystem, including a species of moss not seen in Sweden since the 1930s, was found in a cavern of the Kungsträdgården metro station last year, archaeologists called to the Citybanan scene were completely floored by the new find.

“If there had been an existing cavern here, we would have no doubt assumed this was a copy of Mjölnir used by Viking leaders in rites and ceremonies,” said Lhodgeec N’Dreesun, chairman at the Norse Myth Appreciation Society in Borås.

The object, however, was found partially encased in granite. A specialist archaeological team, with experts called in from Iceland and Denmark and niche Swedish smiths, has ordered that the hammer remain in the tunnel until some initial tests can be run.

“I don’t think my colleagues understand the empirical implications of this,” N’Dreesun told The Local.

“It’s easy for us scientists to slip into atheism by some kind of default, a work hazard of sorts, but I have no idea how to explain this.”

Unlike many figures in dominant world religions, such as historical figures Jesus or the Buddha, religious experts long assumed that the pantheon of gods in the Norse myths were symbolic characters.

Thor, the god of lightning, lives on in both the Swedish and English words for Thursday (torsdag). According to Statistics Sweden, 1,896 people in Sweden are named Tor or Thor – one of them is a woman.

And Sweden is no stranger to Viking relics, with the southern plains and the fertile agricultural lands around the Mälaren Lake in central Sweden littered with rune stones.

Powerful Viking leaders were sometimes buried with their riches, including ships and human sacrifices — often slaves — placed in the earth alongside them, only to be unearthed centuries later by archaeologists.

Depictions of the gods are not unheard of either. Several statues with enlarged phalluses have been found and are known to be replicas of the Norse fertility god Frey.

“We have documented many depictions of the gods, including decoration of the Viking longships,” said Nordic history archivist Mary Grandsson in discussing the recent find.

“This is different, this is a full-scale depiction of an object that belonged to a god.”

Grandsson said that while other gods were associated with specific objects, including love goddess Freya’s Sessrumnir necklace or Odin’s horse Sleipnir, Mjölnir was by far the most well-known.

Several small versions of Mjölnir, many with a loop allowing it to be threaded and worn as a necklace, have been found over the years. As cheap knickknacks, they are still flogged off to tourists visiting Sweden.

“There is even a Hollywood film now about Thor, which I thought was rather silly but fun,” Grandsson said.

As for the mystery of how the object came to be stuck in the bedrock, she said it was a question for the engineers and the archaeologists to crack.

“Obviously someone put it there, maybe the Citybanan blasts destroyed a previously undocumented cavern or something,” she speculated.

As the night draws near in Sweden we can now reveal our chicanery, skulduggery and general tomfoolery.

The Citybanan project is one of the biggest infrastructure projects in Stockholm since the metro was built.

Freya did have a necklace, but it was called Brisinga, not Sessrumnir as stated in the article.

Odin did have a horse called Sleipnir.

And for our dedicated commenters, we chose to name our “experts” in this article after a select few of them: Svensk Smith, Logic and Reason, Johan Rebel, GrandMary, and Intrepid Fox. Happy April to you.

This article was updated at 7:40pm.