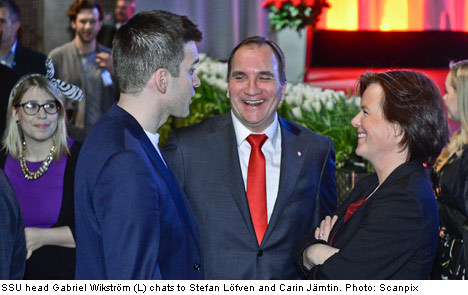 Profits in the welfare sector has been one of the most fiercely contended questions in the run-up to the Social Democrats’ extra congress, the last full gathering of the party ahead of next year’s parliamentary elections.

Already last year, when Swedish media uncovered a string of severe neglect cases – including maggot-infested sores and amputations – at privately run carehomes for the elderly, many political observers noted that the Social Democrats did not pounce on the issue. Many had expected them to use the scandals to lambast the centre-right government.

Since then, the hot-button issue has not gone away. Party leader and former union boss Stefan Löfven on Thursday told the party faithful that he did not want to cap profits, but instead ensure quality of services through other measures.

On Friday, a compromise was reached before voting took place at the congress, where delegates from regional and issue-based associations have the power of the vote against suggestions from the party leadership.

Party secretary Carin Jämtin told the TT news agency on Friday that she was pleased with the compromise. It has added the provisions that would in essence limit the possible profit margin of private companies, by enforcing requirements on staffing’levels, but not by technically cap profits.

Not everyone was happy with the deal, however. Several delegates reportedly insisted that all companies operating with tax payers’ money should be non-profit.

The issue was hotly debated all throughout Friday morning, with one source divulging to TT that the central leadership came down hard on its critics. Projecting an image to would-be voters that the party was not fully behind its leader was reportedly to be avoided at all costs.

At the close, regional delegates from Skåne were openly tepid about the results.

“We didn’t get as far as we wanted to, but we are ready to accept this compromise,” Andreas Schönström from Malmö told the TT news agency.

Löfven himself downplayed any potential rift.

“The congress discusses different issues and there are delegates with opposing views. I think that happens in all political parties and it happens in ours,” he said.

“There’s nothing to worry about.”