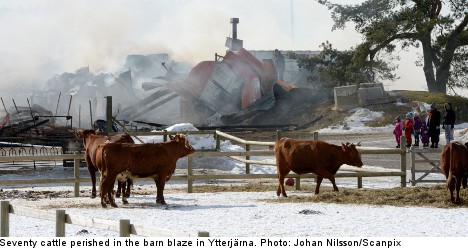 The blaze took place in late March at the Naturbruksgymnasium high school in Ytterjärna, where a giant barn burnt to the ground taking the lives of the cattle. No person was injured in the incident.

The suspects are aged between 20 and 50. Local police believe there is a connection between the fire and several other fires in the area.

“The way it looks now, there are about four to five fires, but we think that there are more in Sörmland and Södertälje. I don’t want to go into details about which fires they are. But we think the number will grow,” Anders Göransson of the local police told Sveriges Radio (SR).

Police refused to go into details about the motives of the suspected arsonists.

“It’s clear that we have come to conclusions on this front, but I don’t want to go into it now. The investigation is confidential.”

The agricultural high school where the barn was burned is owned by the Nibble Foundation (Nibblestiftelsen), which focuses on biodynamic milk production.

Ytterjärna and its environs are home to many agricultural and educational establishments inspired by the anthroposophic movement.