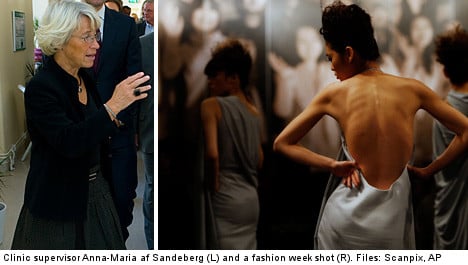 “For people who have an illness centered around weight and looks, it’s catastrophic to throw them into a business that focuses on exactly those things.”

Birgegård’s reactions came following reports that patients at the Stockholm Center for Eating Disorders had been approached by agents looking to recruit new models.

“We think this is repugnant. People have stood outside our clinic and tried to pick up our girls because they know they are very thin,” chief doctor Anna-Maria af Sandeberg told the Metro newspaper.

“It sends the wrong signals when the girls are being treated for eating disorders.”

The last incident took place a year ago, when the clinic was forced to change its procedures for the walks that its patients take. One of the patients who was approached by a scout was so ill she was sitting in a wheelchair at the time.

It remains unclear if one or several agencies were responsible for sending scouts to recruit models at the clinic.

In one incident, an agent with one of Sweden’s largest modelling agencies approached a 14-year-old girl and left a business card.

The girl’s mother and care coordinator Chistina Lillman-Ringborg later confronted the agent, explaining that the girl suffered from a serious illness.

“They claimed that they approach healthy, normally slim young people and that they never urge anyone to lose weight; that’s how they defended themselves,” Lillman-Ringborg told the TT news agency.

“I was so upset because this girl was so skinny.”

Many of the girls who were approached last year were in their teens. Some patients have a body mass index as low as 14. A healthy BMI for adult women is considered to lie between 18.5 and 24.9 on the scale, which is a measurement of a person’s height-to-weight ratio.

The clinic has room for 1,700 patients at any one time. The Stockholm Center for Eating Disorders cares for out and in patients with facilities to care for whole families and admit day patients.

The clinic, the biggest of its kind in Sweden, focuses at first on getting starvation, binge-eating and vomiting under control, before moving onto psychological care.

“Co-operation with the family and the social network is an important part of the treatment,” the clinic writes in a statement online. 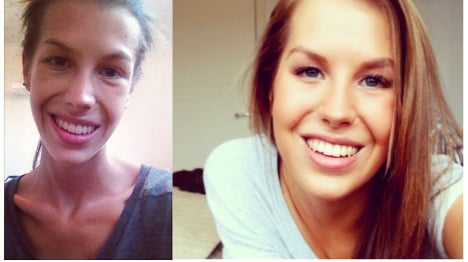 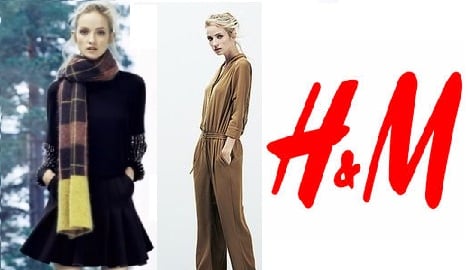 H&M
H&M: ‘Our fashion models are too thin’

The latest picture on 18-year-old Antonia Eriksson's Instagram account (@eatmoveimprove) is a plate full of rice, beans, and meat. The caption: "Carbs make you fat? HELL NO! Carbs make you strong!"

The first picture on her account, just 15 months ago, tells a different story.

"As feared they had me admitted to (the) hospital since the anorexia had gotten so crucial," the caption reads. The picture is of the hospital bed where Eriksson lay, weighing only 38 kilogrammes. Her body was shutting down and doctors feared she wouldn't have lived another day on her own.

More than 10,000 Swedes, mostly women, suffer from anorexia according to data from the Swedish Council on Health Technology Assessment, and as many as one in three Swedish women has an eating disorder of some kind.

Eriksson's own descent into anorexia began at the beginning of 2012 after she and a friend counted their calorie intake on a whim. What began just for fun quickly became an obsession, and in September she was admitted to the hospital – where she stayed for two months.

"I think I knew something was up from the very first day, but I didn’t really admit that I had a problem until I was already really sick," Eriksson told The Local. "My dad called the eating disorder clinic in town, and by the point I knew it was dangerous. I had stopped working out because my body couldn’t cope with it."

"My phone was overloaded with pictures of really skinny girls," Eriksson said. The majority of the accounts she followed were what are known as thinspo accounts ("thin inspiration"), so-called encouragement for people who want to lose weight – lots of weight.

But Instagram wasn’t all negative. That day in the hospital Eriksson also discovered a community of support on the social image site, and decided to reach out.

"I made my first post that day in the hospital," Eriksson said. At first she posted anonymously under the account name @fightinganorexia, wanting support but not wanting to share her struggle with her peers. "I had seen what a huge network there was, and I wanted to be a part of that. Everyone talked to each other and supported each other. And I needed someone to reach out to. I needed someone who understood."

From there Eriksson's situation improved rapidly, and by February 2013 she had reached a healthy weight. She created a new account connected to her identity, wanting to be trustworthy and easy to connect to. Today her account is "fitspo", inspiring people to be fit – and not worry about their weight.

The contrast is astonishing. Every day Eriksson posts images of food – not celery sticks and salad, but "normal food", everything from fried potatoes to porridge to chocolatey desserts. Eriksson doesn't follow a diet, and encourages others not to either. And while she does upload fitness images as well, of herself sweaty and glistening in workout clothes after an hour at the gym, she never shares numbers – neither weight nor calories. At the time of writing Eriksson has 28,100 followers, many of whom have struggled or are currently struggling with eating disorders.

"Today I get over 20 emails a day, and the same amount of messages (on social media)," Eriksson told The Local. "And my comment feed on Instagram is insane."

And she answers all of them, not wanting anyone to feel alone.

"I just want to inspire people. There are so many young girls who feel awful about their bodies today, and I want to show them that they don’t have to. It’s not about your weight, it’s about being happy. You only have one body and it’s not worth mistreating it."

The battle is not over, as there are still thousands of people suffering from eating disorders  – and innumerable thinspo accounts on Instagram. The thinspo tag was censored on Instagram for a time, but was made searchable again in October last year. Eriksson thinks the social media site needs to take the next step.

"A site like Instagram has a responsibility to look out for their followers and block dangerous hashtags if they can," Eriksson said. "These thing spread like wildfire. People are in danger and (Instagram) should change the game."

Eriksson's idea of using Instagram as a tool for improvement was not entirely original, but rather inspired by many existing accounts. But it's Eriksson's account which has taken the world by storm. Her story has been featured in media around the world. The Local asked why.

"I think it’s partly just because I’m very open with my story," Eriksson said. "I’ve written all my thoughts, and everything I feel. Not everyone talks about the dark and shameful side of their photos, and I do."

She also thinks timing has a lot to do with her sudden shot to fame.

"The story blew up because it gives people hope. We’re so used to all these negative stories about eating disorders and mental illness. And somewhere along the line comes this positive story, and that catches people," Eriksson reflected. "People need hope. And health is a big topic right now, people can relate and connect. My story just happened to come at the right time." 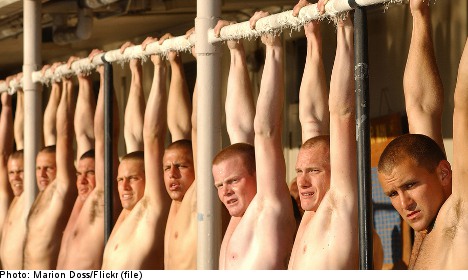 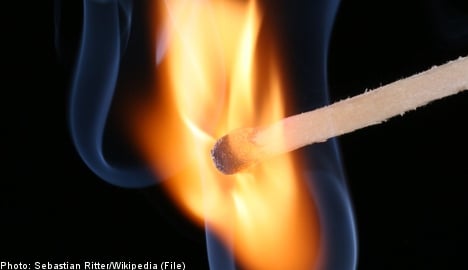