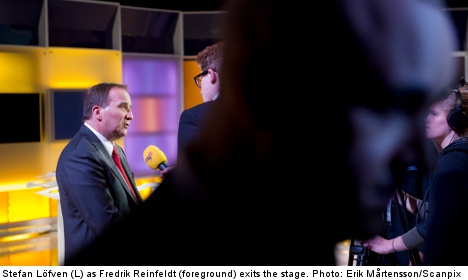 Reinfeldt and his colleagues in the Alliance government coalition of four parties immediately pressed Löfven on what constellation of lawmakers he would lean on in parliament to form a government if his Social Democrat party garnered enough votes.

“I’d worry about your own side, I’ll sort it out,” said Löfven when Reinfeldt pressed the issue on Sveriges Television’s debate show Agenda.

Löfven does not sit in parliament as he was plucked from the metal union IF Metal to get the flailing workers party in order before the 2014 general elections. As such, he rarely gets to debate directly with the other party leaders.

He primarily lambasted Reinfeldt’s government over jobs, telling them they had hit a rut over how to tackle unemployment.

His opponents, however, attacked him for a proposal to make the employer’s social security contributions for young employees as high as for the more experienced workers. Their calculations said such a reform would place a 15 billion kronor ($2.3 billion) burden on Swedish companies.

Another hot button topic was the welfare sector. Profit margins for private companies operating in the state-funded sector was on Left Party leader Jonas Sjöstedt’s agenda, but Liberal Party (Folkpartiet) leader Jan Björklund was quick to underline that the government was also keen to ensure quality.

“In reality, we are approaching each other on this topic. You (the Left Party) have had an incredibly critical attitude to private alternatives,” Björklund said, adding that the government had been too quick to see only the allure of privatization.

“Nowadays we are much more realistic. Yes, we want freedom of choice, we should have private alternatives, but we have to place greater demands on the operatiors.”

Löfven interjected to ask how the government could have failed to imagine some negative effects of privatization, but Reinfeldt countered by saying that the issue was secondary and that it would not due to forget the positive outcomes.