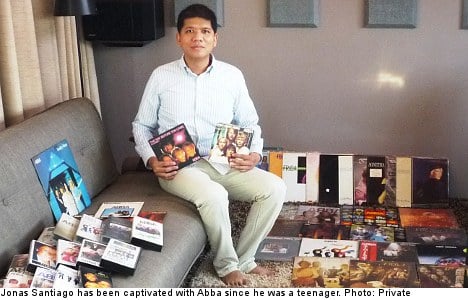 My name is Jonas, a fairly common Swedish name, although Sweden was the farthest thing from the mind of my father when he gave me that name when I was born 46 years ago, in Manila.

In my youth, my only pop music exposure was listening to Casey Kasem’s American Top 40 on local radio when it aired on Sunday afternoons. I loved 1970s light rock music and I probably heard Abba on the radio back then but I don’t really remember.

But one evening back in 1980 (or was it 1981?), a 55-minute programme viewed on a 12-inch portable black and white television set managed to turn my 14-year-old world upside down.

The culprit? A local television station broadcast of Abba playing in Switzerland.

Never before had I had heard Take A Chance on Me, Thank You for the Music, and Chiquitita so closely and intensely. But Abba in Switzerland mesmerized me.

IN PICTURES: Jonas shows off his own Abba collection

It seemed Agnetha and Frida looked directly into my eyes as they sang with such sincere emotion. They had beautiful voices singing even more beautiful songs and they looked like angels as they did so.

After that evening I just had to listen to those songs again and this led me to buy Abba’s Greatest Hits Volume 2, my first ever music album purchase. Not surprisingly, I loved each song on that album and so over the next few months, I bought the whole Abba album catalogue that was available in the Philippines at the time.

That TV special prompted me to head out to various record shops in metropolitan Manila looking for Abba cassette tapes, and LP records. I later discovered mail order companies from Sweden and pen pal groups in the hope of meeting someone from Sweden.

Maybe I was bored, maybe it was just hormones. Maybe I was lonely, a quiet shy boy who kept to himself reading comic books and building model airplanes. Seeing Abba on television showed me what I thought were the two most beautiful women I had ever seen in my whole life. I was already a fan of many American television and movie stars of the era, but Agnetha and Frida just blew them away!

Sweden was 8,000 kilometres away, too far for any schoolboy who lived outside of Europe to get to. Thus, my budding obsession with Abba was instead filled with pictures and videotapes and the rare news item in newspapers or magazines.

SEE ALSO: Why Sweden has Abba to thank for the music

Later on in life, while living in the United States in the late 1990s to train as a doctor, I was finally able to fulfill my childhood dream of going to Sweden. Fortunately, there was an Abba exhibit at the Nordiska Museet, and while I didn’t get to see Agnetha and Frida in person, I was thrilled to be able to visit their homeland.

I eventually moved back to the Philippines to work in nuclear medical imaging, but Sweden has always been in the back of my mind. I often fantasized about making enough money to buy a summer home on the Stockholm archipelago island of Viggsö, where Abba spent time composing hit songs in the 1970s.

Or maybe I’d make a big scientific discovery and win a Nobel Prize, and then I could ask Agnetha to accompany me to the award ceremony.

So far, many of these dreams have remained just that, although I have managed to buy two Volvos and a few items of Ikea furniture to help keep my Sweden dreams alive. But now, with the opening of the Abba museum in Stockholm, I find my passions stirred once again, three decades after I caught the Abba bug.

When the opening of the Abba Museum was announced earlier this year, I wasted no time reserving a room at the adjoining Melody Hotel even though it was still under construction. I also bought tickets for the museum at the opening hour on opening day.

Of course, I don’t play their music as often as I used to and most of the picture books are in my office but seldom opened. So why do I still want to see them? Why is Sweden still such a fascinating and mysterious place for me? Why do I still have that Abba bug that infected me as a teenager?

In many ways, Agnetha, Frida, and the unforgettable songs they sang represent Sweden to me: cold and white; elusive yet reachable; sensible, melancholic, genuine, radiant, saintly… or should I say queenly.

I’m going to Sweden to capture the magic of my youth, when Angel Eyes, Move On, and Dancing Queen sounded like songs sung by angels singing the Hallelujah chorus near the gates of Heaven; such pure, pure joy.

That was a time when my only care was to do my homework and avoid bullies at school. There were no loans to repay, no bills to pay, no personal relationships to think about. My hope is that the museum will help me recapture that time of my youth when inexhaustible hope and bold optimism was all that I had. And maybe that is why I am going to Stockholm, to be inspired again at a time of my life when I’m fighting as hard as I can to avoid middle age.

In the end that is what the museum will give to its visitors – Abba fans and non-Abba fans alike – hope and inspiration for what they could be with a lot of determination and hard work.

And who knows? Maybe I’ll get a chance to finally meet those Swedish Dancing Queens.

Jonas Santiago is a doctor who lives and works in the Philippines and has been unable to find a cure for his Abba addiction.