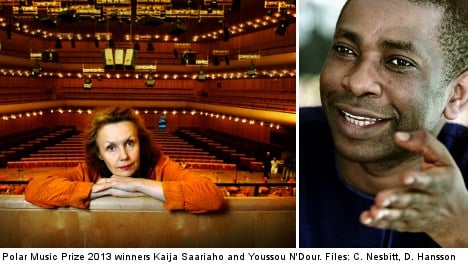 “A West African griot is not just a singer, but a storyteller, poet, singer of praise, entertainer and verbal historian. Youssou N’Dour is maintaining the griot tradition and has shown that it can also be changed into a narrative about the entire world,” the jury said in its citation.

“His voice encompasses an entire continent’s history and future, blood and love, dreams and power,” it added.

The 53-year-old singer, composer and musician, who is also the current Senegalese minister of tourism, has enjoyed worldwide success with his eclectic music inspired by his modest roots and political beliefs.

The jury meanwhile described his co-laureate Saariaho as “a unique composer, a metal worker’s daughter who reexamines what music can be.”

The 60-year-old musician combines acoustic instruments with electronics and computers, and has written chamber music, orchestral works and operas.

“Saariaho is a modern maestro who opens up our ears and causes their anvils and stirrups to fall in love,” the jury said, referring to small middle ear bones.

The Polar Music Prize was founded in 1989 by the late Stig Anderson, the publisher, lyricist and manager of iconic Swedish pop group Abba.

The winners take home one million kronor ($154,000) in prize money, and will receive their award from Sweden’s King Carl XVI Gustaf at a formal ceremony in Stockholm on August 27th.