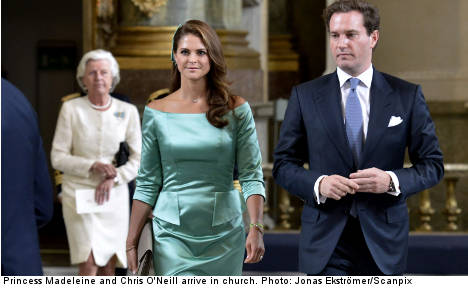 The banns of marriage were read at a church service which was open to the public. The ceremony was followed by a private lunch for the future wedding couple, their families and invited guests. There was also an afternoon reception planned at the Royal Palace for invited guests only.

Chris O’Neill’s Austrian-born mother arrived in Stockholm on Saturday. She divides her time between London and the States, where she lives in a Florida villa bought by her son.

Prince Carl Philip brought his girlfriend Sofia Hellqvist along to the ceremony.

Sweden’s prime minister Fredrik Reinfeldt and speaker of the parliament Per Westerberg were also present.

The tradition of reading the banns of marriage in church was introduced in Sweden during the thirteenth century and remained mandatory until 1973. The ceremony is called “lysning” in Swedish.

Traditionally, the purpose of the ritual was to investigate whether there were any legal barriers to the marriage. Today, that procedure is handled by the Swedish Tax Agency (Skatteverket), but the tradition of holding a church ceremony lives on.

Three priests led Madeleine’s and Chris’ Sunday service, which opened with the psalm Love’s Spirit and closed with a choir segment from Handel’s Solomon oratorio.

The couple had a smaller guest list than Crown Princess Victoria and Prince Daniel, who married in Stockholm’s Great Church (Storkyrkan) in June 2010.

Chris O’Neill has chosen to remain a US citizen following his marriage to Madeleine. A statement posted on the couple’s official royal wedding website explained that Chris has declined Swedish citizenship and so will not hold a position of responsibility with the Swedish royal household.

The Royal Court asked for those wishing to congratulate the couple with a gift on Sunday to consider making a donation to the My Big Day Foundation or the World Childhood Foundation, a charity founded by Madeleine’s mother, Queen Silvia.

Madeleine’s and Chris’ wedding will take place at the Royal Chapel on June 8th and will be broadcast live on television.