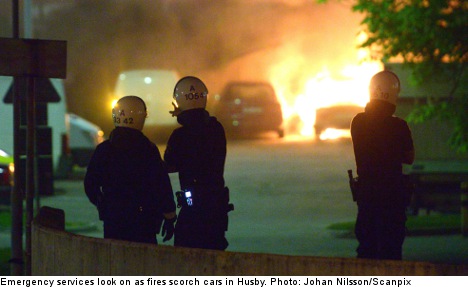 “At 10pm we sent out staff to an address in Husby,” explained Lars Byström of the Stockholm police to the Dagens Nyheter newspaper.

“My colleagues were met by young people who threw stones at them. It continued with a couple of violent riots and extensive damage.”

The riot kicked off when young people set fire to cars in Husby, a suburb in the far north of Stockholm. Witnesses claim at least 100 vehicles in the area were in flames. Another fire was lit in a nearby garage, resulting in the evacuation of the apartment block. Around 50 residents were taken care of and sheltered in buses that were on hand.

The local shopping centre was also vandalized, and three police officers were injured in the fracas. Police estimate that the riots involved somewhere between 50 and 60 youths.

Forty emergency workers from both police and the firefighting service were on hand.

The protests come in response to a fatal police shooting of a 69-year-old man in Husby last Monday, according to the youth organization Megafonen. The man had been threatening police with a machete before he was shot.

Initially, police told the press that the man had died from his injuries at hospital, but it later emerged that the 69-year-old died at the scene.

Many neighbours questioned why police used such extreme violence to deal with the situation.

“This was an old man with a knife facing a whole gang of specially trained armed police officers. Did they really have to kill him?” a neighbour said to the Aftonbladet tabloid the day after the shooting.

A community-based organization that aims to organize residents of Stockholm’s northern suburbs to fight for social justice claimed Sunday night’s disturbances started as a “reaction to police brutality against citizens, our neighbours”.

“We understand that people react like this,” Rami Al-Khamisi from Megafonen said in a statement.

Calm was restored to Husby by 5.30am. Police did not, however, make any arrests.

“We’ve not made any arrests, but we’ll try to during the day. We’ll take a look at security footage and speak with witnesses so we can take legal action against the people who are guilty of crimes,” Byström told DN.