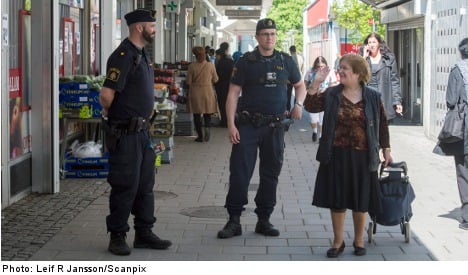 A handful of cars were set ablaze in various suburbs.

“When it comes to car fires, there have been a few, spread out in various locations, but not as many as in recent days,” Stockholm police spokesman Lars Byström told Sveriges Radio.

A police patrol in Vårberg, a suburb south of the capital, was attacked by rock-throwing youths, but no one was injured and no arrests were made.

And in Jordbro, another southern district, police were attacked with stones by a couple of people as they tried to arrest someone for assault, and used teargas to defend themselves.

A day earlier, the unrest had spread to other middle-sized towns in the country, but early Sunday there were no reports of trouble outside the capital.

Police reinforcements arrived on Friday from Sweden’s second and third biggest cities, Gothenburg and Malmoe, which have both experienced riots in recent years.

A large number of parents and volunteers have also been patrolling the streets to help deter troublemakers and restore calm.

Both efforts have helped reduce the intensity of the riots in recent nights, police said.

“With the strong presence on the streets of the good forces, and the police reinforcements, I think we are well on our way towards calmer times in the coming days,” Stockholm police spokesman Kjell Lindgren said.

In a country long seen as tranquil and egalitarian, the unrest has sparked debate among Swedes over the integration of immigrants, many of whom arrived under the country’s generous asylum policies and who now make up about 15 percent of the population.

The Scandinavian country has in recent decades become one of Europe’s top destinations for immigrants and asylum seekers, both in absolute numbers and

relative to its size.

But many of them struggle to learn the language and find employment, despite numerous government programmes.

The riots began in Husby, where 80 percent of inhabitants are immigrants, believed to be triggered by the fatal police shooting of a 69-year-old Husby resident last week after the man wielded a machete in public.

The riots have prompted Britain’s Foreign Office, the Dutch foreign ministry and the US embassy in Stockholm to issue warnings to their nationals, urging them to avoid the affected suburbs.

According to the OECD, Sweden still ranks among the nine most equal member states of the organisation which includes the world’s leading economies.

But inequality surged by one third between 1985 and 2008 — the largest among all OECD countries, the organisation said in a report earlier this year.