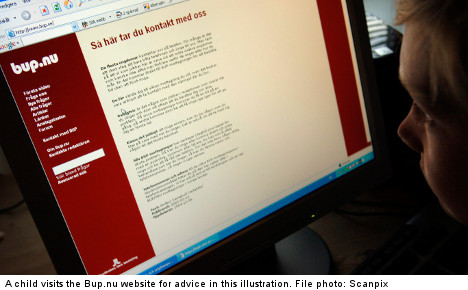 While young children in Sweden are considered to be in good health overall, a review by the National Board of Health and Welfare (Socialstyrelsen) has shown that 15-year-olds are not feeling as well as their peers in other comparable countries.

The report also noted that the number of 16- to 24-year-olds receiving help for psychological ailments has increased.

Looking at the 18 to 14 age bracket, the report showed that young adults are increasingly depressed, suffering from anxiety and falling prey to addiction. They are also spending more time in psychiatric institutions, with the increase in young adults receiving institutional care increasing far more rapidly than in any other segment of the population.

“We are still failing when it comes to support in the early stages and in getting information out to patients,” report author Karin Flyckt told the TT news agency.

“Children and young people don’t know where to turn.”

The report also noted that many medications that have not been tested on children are being prescribed anyway, especially while receiving institutional care. Health care staff had a serious lack of knowledge of how to administer pain killers, the report also said.

Out-patient treatments are also on the increase for Swedish children. Most commonly, doctors are examining children to see if they suffer from ADHD. Swedish authorities have seen diagnoses of the disorder increase, and drugs to treat it with also rising. The health board has issued warnings about the lack of studies on the long-term effects of drugs used to treat ADHD.

In the various statistics, socio-economic circumstances stood out as risk factors for children in Sweden. Those who are raised by a single parent with little education and with low incomes have always figured more prominently in health care statistics, with no exception found in the mental health overview.

From the time they are 15 and on into their late twenties, young men and women in Sweden are significantly more at risk of suicide and accidents, when compared to teens whose mothers who went on to study after high school.

About 25,000 children in Sweden do not have regular access to nutritious food or internet access. While the health board notes that the standard of living has increased for families at the bottom end of the scale, the differences between richer and poorer families have become more distinct.

The agency estimates that between 100,000 and 200,000 children have noticeably worse family financial situations, yet usually have both their own room and a mobile phone.

HEALTH
INTERVIEW: Does coronavirus mark the end of neoliberalism in Sweden?
Url copied to clipboard!