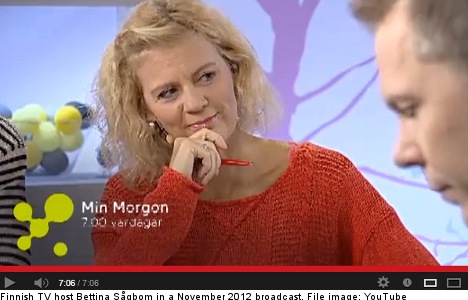 Bettina Sågbom, a popular television anchor, revealed on Twitter on Monday that she had received emails threatening the lives of her and her family.

On Tuesday she announced she had received a fresh email stating her death “would be made to look like an accident”.

(“Today I received a death threat in the mail. And my family too. The blood will splash all the way to Sweden when it happens. Bloody yokels…”)

Following the threats against Sågbom, which are now being investigated, other members of Finland’s Swedish-speaking community, including well-known journalists and the vice head of the Swedish People’s Party, said they had received similar threats.

The Minister of the Interior Päivi Räsänen condemned the menacing messages, calling them “crimes”.

“No one in Finland should suffer threats because of language, ethnicity, or religion,” she said in a statement.

Dozens of people gathered on Wednesday in Helsinki to protest against the threats.

They were made public at a time when the status granted to the Swedish language is increasingly being debated in Finland.

Even though Swedish is the mother tongue of just over five percent of the population in Finland, it is an official language alongside Finnish, and all children must learn it.

The far-right True Finns party is pushing for its removal as a compulsory language in school.

James Hirvisaari, a member of the True Finns party, known for claiming that learning Swedish amounts to “snobbery” and a “waste of time”, rejected the threats, saying on Twitter that “nobody should be afraid in Finland.”

Finland was part of the Kingdom of Sweden for almost 500 years until it joined the Russian Empire in 1809. Finland became independent in 1917. The Swedish-speaking population is concentrated mainly in the south and west.