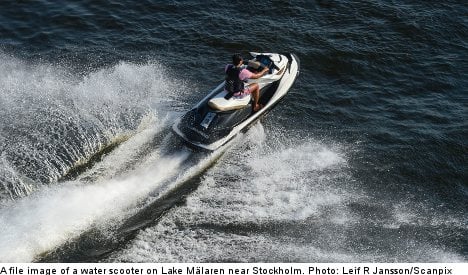 The 46-year-old woman had taken to the water near Blackberg in western Stockholm on a day when temperatures climbed to 25C.

According to witnesses, she was between 30 and 40 metres from shore when she was run over by the speeding watercraft.

“I saw how the water scooter came at full speed and I managed to stand up and shout. She didn’t hear me and the scooter driver ran her over,” witness Anders Hammarberg told the Aftonbladet newspaper.

The woman then lay motionless in the water until someone in a passing boat pulled her out of the water.

Following the incident she was flown to hospital by ambulance helicopter.

“She been operated on for head injuries and remains sedated. According to the hospital, she’s in serious condition, but stable,” police spokesman Martin Holm told the TT news agency.

Police are now on the hunt for the driver of the water scooter, but have yet to make any arrests in the case.

The driver may face any of a number of criminal suspicions, including causing bodily harm, reckless boating, as well as leaving the scene of the accident.

Witness Hammarberg said he didn’t think the driver of the scooter fled the scene intentionally.

“I don’t think the driver knew what happened,” he told Aftonbladet.