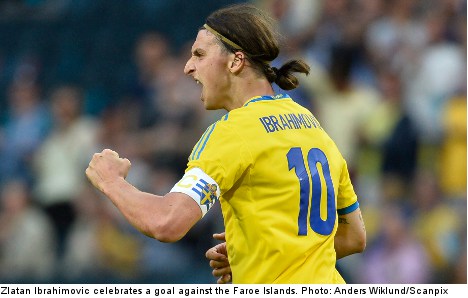 The Paris Saint-Germain striker stabbed home the opener from close range ten minutes before the interval at the Friends Arena in the Stockholm suburb of Solna, and then added a penalty eight minutes from time.

“It was important to win,” he told reporters following the match, according to the Dagens Nyheter (DN) newspaper.

“You’re probably going to say that we should have had more [goals], but the most important thing is that we won.”

The first score, Ibrahimovic’s first for the national team since he exploded for four goals against England in November, came after a cross by Mikael Lustig slipped through the penalty area past two Faroe Island defenders to the waiting star striker.

Ibrahimovic’s second goal, a thundering penalty that zoomed just past the fingertips of a diving Faroe Island keeper, brought the 31-year-old captain’s tally of national team goals to 41, just eight shy from Sven Rydell’s record of 49, which he set with a hat trick against Finland in 1932.

Sweden were ultimately comfortable winners despite the sending-off of Andreas Granqvist towards the end, and Erik Hamren’s side climb back into third place in qualifying Group C in a match that was marked by a number of heated exchanges.

“I’ve never played against a team that whined so much,” Ibrahimovic said.

With 11 points from six games, the Swedes are five points behind leaders Germany but level on points with second-placed Austria and the Republic of Ireland in fourth.

Despite the current three-way tie for the group’s second spot, Ibrahimovic expressed confidence.

“We’re going to come in second,” he said.