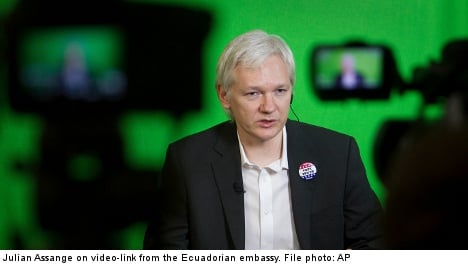 Albuha earlier this week denied a British newspaper report that Alban was removed for taking in Assange, who has now lived in the embassy for a year. The foreign minister said she requested a transfer last year and had submitted her resignation early this year.

But the move comes days before a visit to London by Ecuador’s Foreign Minister Ricardo Patino, who is scheduled to meet Monday with British Foreign Minister William Hague to discuss Assange’s situation.

Patino said last week he hoped the meeting with Hague “will enable us to envisage a solution to the Assange case”.

Assange turned up at the Ecuadoran embassy after the United Kingdom’s Supreme Court turned down Assange’s last appeal to avert extradition to Sweden.

British police are under orders to arrest Assange if he sets foot outside the Ecuadorean embassy.

He is wanted for questioning in Sweden over rape and sexual assault allegations, but the Australian activist has said he fears he will be extradited to the United States to face trial for a massive leak of US diplomatic and military documents.

Albuja said that Ecuador’s appointment of Falconi received British “verbal approval,” which is expected to be made official in the next few days.