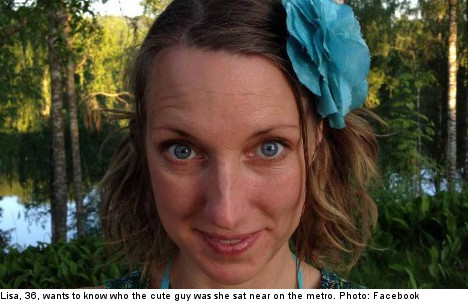 “I was literally in shock the first day. I couldn’t stop laughing. I just couldn’t get my head around what was going on,” Tegelmark tells The Local.

What left Tegelmark in shock was that a somewhat tongue-in-cheek entry she posted on her Facebook page on Sunday night account was being shared thousands and thousands of times.

“I was laughing so hard I was in tears,” she recalls.

“Then the Aftonbladet newspaper called me, and all I could do was laugh some more.”

Tegelmark’s unexpected rise to fame began last Sunday when she struck up a conversation with a stranger sitting across from on a green line train.

After what Tegelmark describes as a “relaxed and friendly” conversation, the man hopped off the train a few stops later, leaving her wishing she had exchanged phone numbers with the mystery man in a green t-shirt, or at least gotten his name.

On a whim, she decided to write about the encounter on Facebook.

“Who were you, you super hot guy who I happened to sit across from on the metro with all my camping gear when I boarded at Gullmarsplan?” she wrote in the post.

“We talked about festivals and smiled at each other. Your smile was so nice and made me happy. You had a bright green t-shirt and nice, slightly suntanned upper arms and your dark blond hair was tied in a knot or a pony tail.

“I never managed to ask you your name before you rushed off at Slussen to change to the train to Ropsten that was waiting on the other track.

“I looked for you to see if you looked back at me when you sat on the other train. It looked like you were trying to see me too.

Tegelmark admits she used deliberately colourful language to describe the incident in hopes of putting a smile on the faces of her Facebook friends, a couple of whom asked if they could share her post.

She agreed, not realizing that doing so would open the floodgates and lead to frantic week of interviews and media appearances.

The post was shared nearly 5,000 times and Tegelmark found her inbox flooded with encouraging emails and friend requests.

“It seems to have inspired a lot of people, which is really cool. I’ve heard a lot of other similar stories,” she says.

In the wake of her Facebook-inspired fame, Tegelmark launched a separate fan page that garnered 1,800 fans almost overnight.

Despite being a bit bowled over by all the publicity generated by her poetic plea to identify the stranger she met on the subway, Tegelmark says she has no regrets.

“I’m not the sort of person who has regrets. What’s done is done; you can’t undo it. The trick is to make something of it,” she explains.

However, she does feel a twinge of guilt over any unease the ordeal may have caused the guy in the green t-shirt, who has yet to come forward.

“I understand why he would want to remain anonymous now,” Tegelmark says.

“It was really nice meeting him, but I’m not even sure how it would be to meet him now. Sure he was cute, but I don’t really know much more about him.”

A life-coach in training, Tegelmark also figured the timing was right for her to launch a blog that could help inspire others to remain open to the unexpected opportunities that come their way.

“I love to write and am really passionate about helping to inspire and motivate others,” she explains, adding that the blog, www.lisaochkarleken.se (‘Lisa and love’) is still in the final stages of development.

Tegelmark says the incident makes her think Swedes could be better at making small talk with strangers, although she thinks it’s more of a problem in bigger cities like Stockholm, whereas residents in smaller communities are more apt to exchange pleasantries.

“It’s too bad. There’s really no reason not to say hello to someone,” she says.

“A lot of the comments I got praised me for daring to talk to him. I’m pretty outgoing, so it felt pretty natural. But people shouldn’t be afraid to take chances that crop up in everyday life, because otherwise they will just pass them by.”