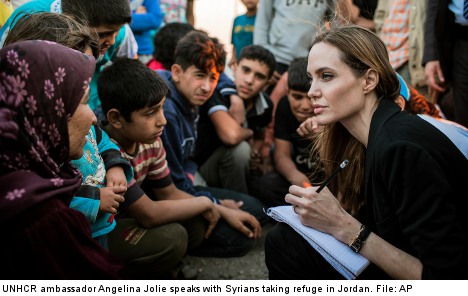 “By bringing together our partners and funding new technology, we can help make a tremendous difference to the world’s most vulnerable children,” he added.

The Ikea refugee shelters have been designed by a group of Swedish designers within the Refugee Housing Unit and are equipped with insulation and solar panels which provide enough electricity for lighting.

“Our goal is to revolutionize the refugee tent, or at least improve it,” said Johan Karlsson of the Refugee Housing Unit in a film on the Ikea Foundation website.

“Like an Ikea bookshelf, it is easy to transport and easy to set up in the field.”

Much of the temporary housing in refugee centres often has a life span of as little as six months and the typical white canvas style tent design has shown incapable of meeting the needs of refugees.

“Quite frankly the tents have not much evolved over the years – they still rely on canvas, ropes and poles. They are hot during the summer and cold in winter,” said Pierre Olivier Delarue of the UNHCR in the film.

“On average a family will spend 12 years in a camp, so many children will grow up calling this shelter home,” he added.

The refugee shelter project, into which the Ikea Foundation has poured some $4.5 million, remains at the prototype stage and the first batch of shelters are set to be tested by the UNHCR in a camp in Ethiopia.

The test families will be able to provide feedback on the shelters as part of the UNHCR evaluation of the project.