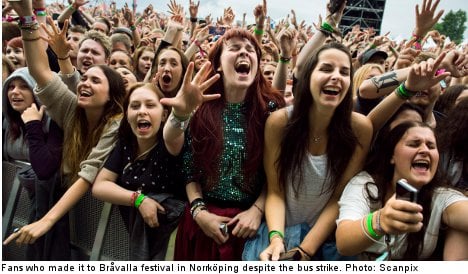 “We are very happy,” said Annelie Nordström at the Kommunal union.

The key issues for the union, aside from salary level, concerned working hours and that bus drivers sought a guarantee to avoid having to re-apply for their jobs when a new contractor takes over bus services.

Nordström is particularly pleased that Kommunal was able to push through all of their four key demands in the three-year contract.

“They are actually specified in the contracts. These include the transfer of staff to a new contractor and a far greater influence for members over working hours,” she said.

According to employers, the agreement stipulates wage increases in line with other other labour market sectors – 6.8 percent over three years.

“I am pleased that we can get transport rolling and that travellers no longer suffer,” Peter Jeppsson, CEO of Bus Employers (Bussarbetsgivarna), told the TT news agency.

He said that the wording of the contracts with regards to staff transfers means that there is an ambition to ensure that staff will continue employment.

“It’s not binding in the sense that everyone be transferred but we make a commitment to work towards that,” said Jeppsson.

Mattias Näsström, Traffic Operations Manager at ÖstgötaTrafiken, which includes the provision of tram services in Norrköping, expressed satisfaction at the deal.

“Now we can get going again and are in the process of running trams and buses.”

Norrköping had witnessed chaos on Thursday as visitors to the Bråvalla festival were having trouble getting to the festival site.

“In a few hours, I think that traffic should be back up and running properly,” Näsström said.

In Stockholm, regional transport authority SL said that services should be rolling as normal on Friday morning.

Minister of Employment Hillevi Engström expressed satisfaction that the nine day conflict had been brought to a conclusion, while stressing that it was a matter between the parties.