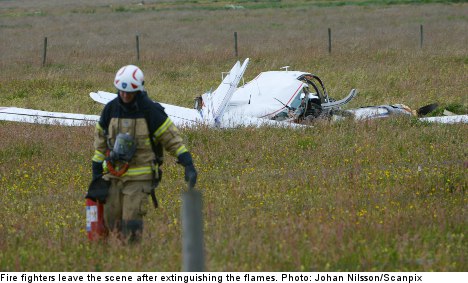 The 55-year-old pilot died on impact. There were no other passengers on board.

The plane was on the way from Kristianstad and heading to Sturup, both in southern Sweden, when one of the two engines of his G-A7 failed. The pilot alerted the flight controllers at Sturup that he was making an emergency landing, and he hit the ground in Veberöd, northern Skåne.

“It took us 11 minutes to find the wreckage. It was a complete wreck,” Annika Vestergård of the Swedish Accident Investigation Board (Haverikommissionen) told the TT news agency.

The local police sent six officers and sniffer dogs to the scene in the search for other passengers.

“We have not found anyone, the plane was a multi-passenger plane with one person in it. We have cordoned off the area and will now hand it over to the Accident Investigation Board,” officer Christian Hakesjö told the Expressen newspaper.

An unknown amount of fuel leaked from the plane following the crash, but experts have said the leak will not affect nearby irrigation channels.

The incident is now being investigated by the accident investigation board.